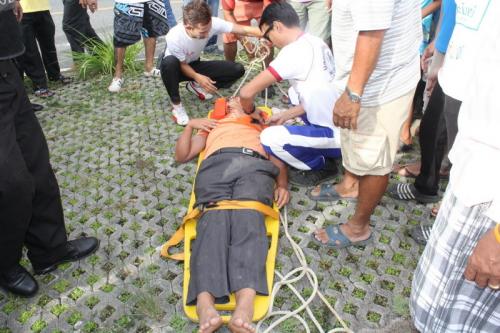 Police received a report of the incident at about 4:50pm and rushed to the scene with Kusuldham Rescue workers to find Korean national Don Yeol Seo alive, but trapped in the overturned vehicle.

“Mr Yeol Seo, 56, was bleeding from his head and suffering what appeared to be internal injuries,” said Anurak Klangnarong of the Wichit Police.

“Rescue workers had to use a rope to reach Mr Yeol Seo, but it was very difficult due to the dense forest on the steep hill,” Lt Anurak said.

A man identifying himself as a friend of the 56-year-old Korean told police that the victim had been driving from Bor Rae District to Ao Yon.

“He worked very hard that day and didn’t have much time for rest,” the man reportedly told police.

The man added the Mr Yeal Seo worked for one of the hotels in Wichit, but police did not reveal the name of the hotel.

Rescue workers transported the victim to Vachira Phuket Hospital for treatment. Police plan on questioning him once he is released.

Hundreds of Phuket residents come together for World Ocean Day 2013