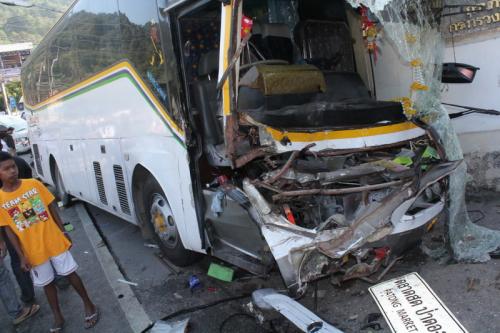 PHUKET: The dramatic crash of a tour bus that plowed into a home in Patong on Tuesday night has prompted the Phuket Land Transportation Office (PLTO) to warn that under new measures tour bus companies found to repeatedly fail safety requirements stand to have their commercial passenger permits revoked permanently.

“Any bus company found to be using drivers who do not have the appropriate license or who have a history of drunk driving causing an accident also stand to have their permits revoked… It is the company’s responsibility to check up on their drivers and vehicle maintenance to make sure their passengers are safe,” he stated.

accident in which five Russians were injured to confirm whether the driver or brake failure was at fault (story here).

“The accident has been reported to the Land Transportation Department head office in Bangkok. We will conduct our investigation and pass on our report to them. They will decide whether any further investigation – or other action – is required,” said Mr Terayout.

“Even at 68 years old, people are still legally allowed to operate a commercial passenger vehicle – as long as they pass the tests for a bus driver’s license,” Mr Terayout said.

Tour buses coming to Phuket from Bangkok and other areas of Thailand remain a top safety concern.

“We cannot test the brakes on every bus coming over the bridge [into Phuket] and the drivers are not used to Phuket roads. This can cause accidents, especially on the Patong and Karon hills,” he explained.

“Even in Phuket, we have discovered that many companies on the island are using vehicles that have not passed their annual vehicle safety inspection. By the end of this month, I will call in every bus service provider on Phuket to remind them of their legal obligations to meet safety standards,” he said.

The penalty for using a bus that has not passed its annual safety inspection is a fine of up to 50,000 baht.

“Companies found to repeatedly neglect the safety inspections will have their commercial passenger permits revoked,” he warned.

Mr Terayout assured that tour buses arriving from outside Phuket will be held accountable by the Land Transportation Office in the province where the vehicle is registered.

“The tour bus company responsible for the bus full of Russian tourists that ran off the road while descending into Patong in late 2011 paid millions of baht in fines and compensation to tourists,” Mr Terayout said.

“For the 2011 case, the company was held accountable because the cause was found to have been brake failure, not driver error,” Mr Terayout explained.

He cited another notorious accident during that same week in October 2011, when a bus overturned on the hill between Chalong and Kata.

“In that accident, the driver was found to be at fault – he was not familiar with the road – so police charged only the driver,” he said.

Video footage courtesy of Wild Kingdom Tours, which has been operating tours from Patong for 12 years.