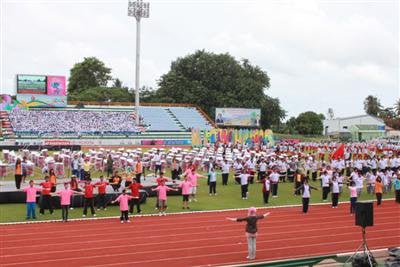 PHUKET: It’s all systems go for the Thailand National Youth Games 2012, which will officially open with an extravaganza today at Surakul Stadium in Phuket Town.

The Phuket Provincial Administration Organization (OrBorJor) held its final rehearsal for the opening ceremony at the stadium, which underwent a major renovation including new spotlights for the event.

OrBorJor President Paiboon Upatising, who attended the final rehearsal was pleased with the show.”We are well-coordinated, with many government agencies and virtually every school joining the performance. The highlight will be the arrival of the Royal Torch bestowed upon us by HM The King to mark the start of the competition.

“The six-act “Amazing Phuket, Fire of the Dream” opening ceremony will reflect different aspects of Phuket’s unique culture and identity as Thailand’s only island province.”

To view the recently-released video promoting the games, click here.

Added star power for the opening ceremony, which runs from 6pm to 8pm will come from performances by Phuket’s own “Dome The Star 8”, who recently took top honors in The Star reality TV show talent contest.

There will also be a performance by fellow Phuketian Silvy the Star, runner-up in last year’s The Star competition.

The closing ceremony, intended to be just as grand, will take place at the stadium on Tuesday, June 5 starting at 5pm.

Mr Paiboon seemed unconcerned that current rainy conditions across the island would rain on the big parade.

“I have checked the weather forecast. It’s not supposed to rain, but even if it does there should not be too much effect because most of the acts can take place under rainy conditions,” he said.

However, the Thai Meteorological Department at 5pm yesterday issued a warning for heavy rain across Phuket and the other Andaman Coast provinces throughout the weekend, with west coast areas expected to get the heaviest downpours.

For the schedule of events and much more information, pick up a copy of the Phuket Gazette that goes on sale today.