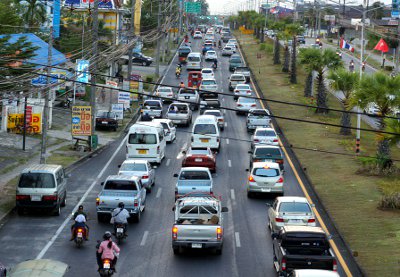 PHUKET: Results of the latest online poll reveal that a majority of Phuket Gazette readers are pessimistic about the 450mn baht underpass to be built at the Bang Khu Intersection in Koh Kaew.

By a wide majority, readers in all three demographic groups thought the project would worsen traffic flow in the area rather than improve it.

The poll, launched on May 7, asked readers: “The final design for the Bt450mn underpass at the Bang Khu Intersection in Koh Kaew has been approved. Although Thepkrasattri Road will be widened to eight lanes in the area, southbound traffic will still have to wait at a stop light before accessing the bypass road. How will this project affect traffic flow after it is completed?”

Overall, five times as many voters (68.6%) thought the project would worsen traffic, than those who believed it would improve it (13.2%).

Almost one-fifth of voters overall (18.2%) thought the project would have no significant impact on the traffic situation in Bang Khu.

In a breakdown by demographic, Thais were the most likely to answer that the project would have a negative impact. Four-fifths of Thais taking-part (80%) thought the project would worsen traffic in the area, compared to just 15% who thought it would improve the flow.

Almost half (45%) of those identifying themselves as Thai predicted the project would result in a “drastic” worsening.

To comment on the results, leave a post in the Readers’ Forum below. The Phuket Gazette welcomes all opinions that meet our house rules.

To vote in the new poll, on the issue of English-language proficiency in the Phuket tourism industry, click here.