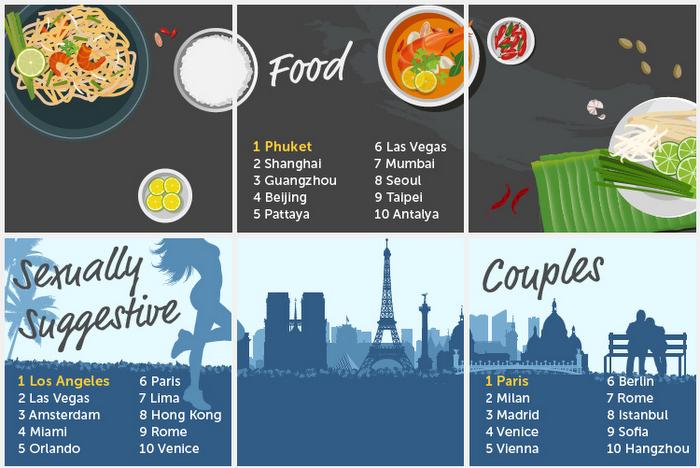 PHUKET: Though the sultans of Instagram selfies reign in London, it’s Phuket food that gets the most publicity on the social media giant, according to research by airport transfer company Hoppa.

“In the modern era, the holiday experience doesn’t just live in the moment and in the memory, it isn’t even resigned only to traditional photo albums… Because now, the holiday experience lives and breathes through Instagram,” Hoppa explained on its website. “If you have an account, it’ll be one of the first places your holiday photos will probably go. Filters, hashtags and captions all seizing your holiday snaps and turning them into the envy of your friends.”

During a one-month period, Hoppa collected 1,000 photos from the top 50 most-travelled-to destinations in the world. Though that offered some basic trending information, the company did some significant further data mining, breaking down the types of photos posted into the following categories: selfies, scenery, couples, food, shopping, group, wildlife, alcohol, sexual and marketing.

When it came to food photos, Asia nearly swept the top-ten list with only Las Vegas sneaking in at number six to represent the western world. And the cherry on top of the foodie photo buffet: Phuket. The island province was followed by Shanghai, Guangzhou, Beijing and Pattaya.

“Phuket Baba food combines recipes from Royal Thai Cuisine, common Thai dishes, Hokkien Chinese food and Malay cuisine, which together create a unique blend of delicate flavors that are not too spicy, not too sweet and not too salty,” Dr Kosol Tang-Uthai, president of the Thai Peranakan Association, told the Phuket Gazette in 2011.

Phuket is the fifth ‘City of Gastronomy’ as it joins Popayan City in Colombia, Ostersund in Sweden, Chengdu in China and Jeonju in South Korea.

However, despite its luxury pool villas and stunning beaches, Phuket didn’t make the top ten when it came to sexually suggestive posts or any of the other sub-categories used by Hoppa.

Of course, those just wanting to generate some social media envy by garnering the most ‘likes’ on their photos should head to Los Angles or Bangkok. But even then, Phuket isn’t a terrible choice, as it landed in 12th place, just behind Barcelona.