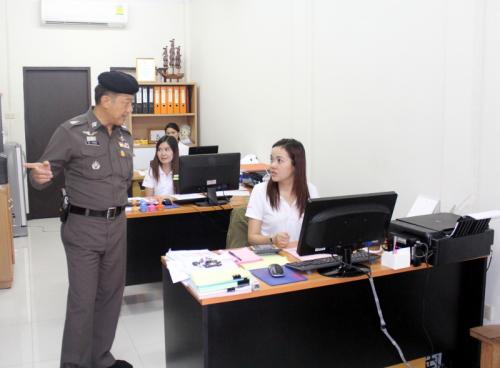 PHUKET: Police are searching for a thief who robbed a small Phuket tour company of almost 70,000 baht this morning.

Pornpirom Junthong, a human resources staffer at the company, told police she went to a bank with a friend to withdraw 69,239 baht from the company’s account.

“After that, they went to a convenience store near the bank and came back to the office in Phuket Villa California housing estate,” Maj Gen Choti explained.

CCTV camera images led police to believe the thief followed Ms Pornpirom and her friend from the bank to the office.

“When the women arrived at the office, Ms Pornpirom took all the money out of her bag and put it on her desk to count. Suddenly, a man in a red jacket came in wielding a switchblade and demanded the money,” he said.

Scared, Ms Pornpirom handed over the cash. The man then pocketed three cell phones – an iPhone, a Nokia and a Samsung – from another desk before walking to his motorbike and riding off.

“I have notified every police station to be on the lookout for the thief. He was wearing a red jacket, black sport shorts, green flip flops and a black motorbike helmet that covered his face,” Maj Gen Choti said.