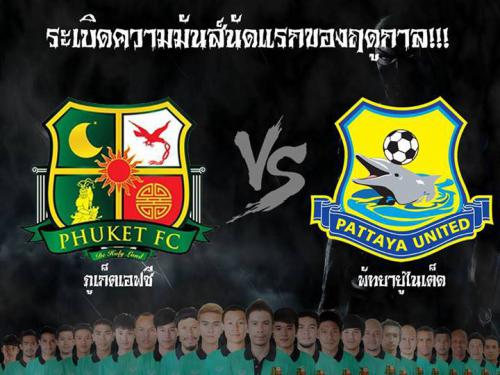 PHUKET: The island’s pro football (soccer) team, Phuket FC has been paired with Pattaya United in the first match of the Yamaha League One (YL1) 2014 season, which will kick off on February 22 and 23.

It has not yet been confirmed whether Phuket’s home match with Pattaya will be on Saturday or Sunday.

Pattaya United, were the only squad to be relegated from the Toyota Thai Premier League (TPL) at the end of the 2013 season.

The Thai Premier League (TPL) Co Ltd, offficial league organizers, yesterday staged the official draw for the first week of fixtures for both of the Kingdom’s professional soccer leagues – the elite TPL – which will be contested by 20 teams this year – and the second-tier, 18-team YL1.

All week one fixtures for the two leagues are as follows:

Each team will play eachother twice – home and away – in addition to contesting two national cups – the Toyota League Cup and the Thailand FA Cup, which will also be contested by the dozens of semi-professional clubs in the Division 2 regional leagues.

Meanwhile, Phuket FC have a number of tough pre-season matches this month and next to prepare themselves for the league opener (see graphic above).