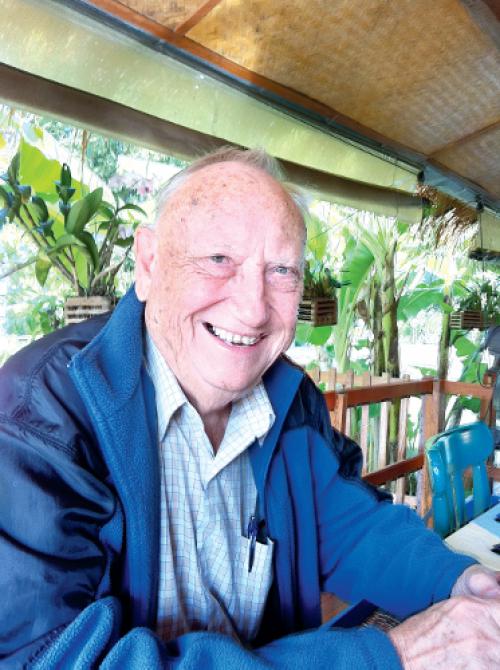 PHUKET: “This Thailand, you farang!” Perhaps it’s that simple for many fainthearted foreigners struggling to justify distorting dreams for self-made financial freedom in the “Land of No Surprises”; but for one Phuket expat, entrepreneurial legend, the plot turned out to be a tad thicker. Anyone doing business in Phuket – or even just entertaining the prospect – should definitely read Don Battle’s autobiography Merchant of the Orient (see end info).

From his poor farm-boy roots in the Alabama boonies, tours with the US Air Force and 24-hour shifts as a rocket scientist during the post Cold War space-race era – leading up to his American heyday inventing, consulting and contracting for the global energy sector, Don’s story ultimately ends up in Thailand – right here in Phuket where he would set the bar for the island’s expat-run SMEs. This, despite prevailing “foreigner-phobia” sentiments and regulations that seemingly make it impossible if not greatly limit the opportunities for non-Thai entrepreneurs to gain momentum for success, Don did it – then retired to write his book about it. Inspired by his story, the Phuket Gazette caught up with Don, who currently resides in Thailand’s North.

As a foreigner doing business in Thailand, what would you say are some of the biggest challenges/obstacles you faced – and that other expat entrepreneurs may likely face? How did you overcome these challenges?

Corruption: As a minority we are confronted and competing with corruption. We don’t have the money to pay the corrupt purchasing officers and others. Even if we did, one week it’s enough and the next week, they’ll want more. I have had great difficulty running my engineering and food businesses and not paying ‘tea money’. Why would someone want to buy from me if I don’t pay while their friends and relatives do? This held me back greatly, or perhaps it saved me from destruction. I think that it saved me.

Government and public attitude towards products and services provided by foreigners: I must say that government policies and regulations were never a problem for me in 30 years of doing business in Thailand. As a matter of fact it is much easier here than the USA. Licenses, work permits and other things involving the government have been easy for me. But whether you believe it or not, a lot of racism exists in Thailand and this is a big obstacle in doing business across the board. If you are selling engineering technology like I did for many years, the racism is erased by what you have to offer. I noticed this a lot in the village that I live in now. Chiang Rai is not like Bangkok. Bangkok is a lot easier to do business than other provinces.

Staffing. No matter where you are, staffing is always a big problem. I used to think that education for your staff was the answer to part of this problem. I spent millions on education of staff and never got anything in return. However, I am happy that I did what I could for education. It is something that no one can steal from you.

Thai women operate Thailand’s service sector. As a rule you cannot get Thai men to work in the service sector. Money is not the answer to a stable staff – happiness in the work place, which includes associates and business owners are. Frequent meetings are important but it is hard to get staff members to freely express themselves during the meetings. I always provided housing and food for staff members and this helped to keep a more stable staff. When a major holiday comes, you have to ask for volunteers to stay and work while others go back home. By doing this, you will have a small working staff during Songkran and New Years. I am not sure that I ever found the answer to stable staff as I had a reasonable turnover.

Pilferage and taking without permission was a major problem for me in the retail business. Even with security systems in place, I was never able to overcome these problems.

I never overcame a lot of the obstacles. I am a fluent Thai speaker, I read and write in Thai. The big difference is that I am not a Thai and I can never be one. I am also a Christian and not a Buddhist. The superstition and black magic has always been difficult for me to understand and deal with.

What little success that I have achieved comes from working night and day. I was objective and work-focused on my mission and business.

I made a serious mistake by having four different businesses in four different provinces where I had to entrust billing and collection to local staff. I lost a ton of money through this serious mistake. I tried to stay about five days in each location with rotation but I could never overcome this problem. Working during the day and flying at night can make an old man out of you in a hurry. It finally got the best of me.

I thought that getting married would relieve me of some of the burdens of doing business but it did not. Very seldom will a Thai take a position of a farang over a Thai… I guessed it wrong.

You successfully secured a substantial business loan from a Thai bank, which enabled you to expand your operations to a considerable degree. In your opinion, what were some of the main factors as to why you were able to secure such a loan as a foreigner?

First, I never wanted to leave the small successful cafe that I had on Sai Yuan Road in Rawai. My greedy landlord wanted to open up their own Don’s and would not renew my lease. They tried and failed. After being in the food business for three years, I could see the potential in Phuket and Rawai. This motivated me to build a good and classy food and entertainment mall just down the road.

I thought that my chances of the Thai banks loaning me money was no more than 50 per cent. At this time Samree Moothong was my manager and girlfriend. She was a great asset to me in preparing for the loan and making the application. She also co-signed the loan with me. You might say that I did not do this without good Thai help. I did an extensive business plan with five-year cash flow projections. I had also included my past three years of successful performance in the plan. I had the business plan translated to Thai. I also used the services of Sam Fauma’s International Law firm to help me. Eddie Farmer from Phuket helped me a lot in my business plan and business development.

After making the presentation and application to SCB, Kbank and Bangkok Bank, I heard from Kbank quickly. I had two rai of land paid for which was worth a lot. My loan application was for six million baht. Kbank came and measured the land and asked me some questions. I later went to the bank and signed the loan application; 29 days after application, the bank called me and said that the loan committee in Bangkok had approved the loan.

What advice can you give to other aspiring, expat entrepreneurs considering applying for a business loan from a Thai bank?

Try to find a business where the product or service is unique and everyone is not already doing it. Stay away from the bar business. When applying for a loan, you need to have good collateral for the bank to attach. A good staff of Thai managers is also needed.

If you could go back in time, what would you do differently in terms of doing business in Thailand?

I don’t think that I would change anything. I depended on a lot of good advice from customers and friends to make the right decisions.

Australia Day message from the Australian Ambassador to Thailand