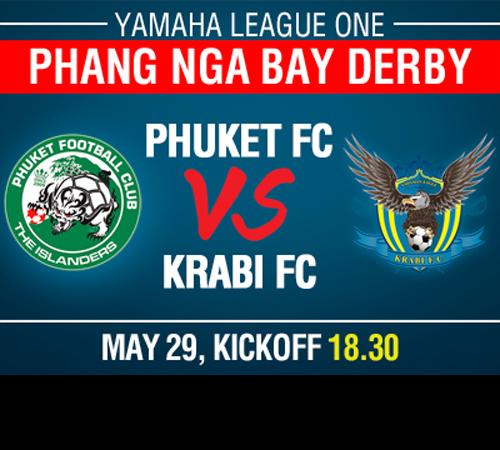 PHUKET: Despite a tough away draw last Saturday in Trat, Phuket FC are in high spirits ahead of tonight’s Yamaha League One (YL1) Phang Nga Bay derby match with Southern rivals, Krabi FC.

The all-Southern match-up, both sides 13th of the 34-fixture YL1 2013 season, will be played at Phuket’s Surakul Stadium with a 6:30pm kickoff (click here for map). Tickets for adults are 100 baht, while youth and uniformed students get in free.

The Phuket Islanders and the Krabi “Andaman Eagles” have met in the national YL1 league twice, both times last year.

Krabi prevailed 1-0 at Phuket’s Surakul Stadium last July (click here for match report), while in the last match these sides played each other, in August of last year, Phuket drew in Krabi.

The local home fans had difficulty swallowing that result, as hundreds of Phuket fans were held hostage in Krabi stadium for hours after the match (click here for article).

The two sides have played in various friendlies over the last two years, none of which Phuket has prevailed. The last time Phuket got an advantage over the Andaman Eagles was in the 2010 Division 2, AIS Southern regional league, when Phuket won at home 2-1, having lost 3-2 in Krabi that same season. Phuket went on to win the league that year and finish as runners up in the national level playoffs for promotion to division 1.

Krabi won the Southern division 2 league the following season (2011), finished 4th of the division 2 promotion playoffs, and last year played their first season in the YL1 season, of which they finished 6th, compared to Phuket who finished 13th.

In the current rankings, Phuket are slightly better off in 5th place with 19 points, 9 behind league leaders Air Force United; Krabi are in 8th place with 17 points.

All previous results considered, Phuket Head Coach Paniphon “Tu” Kerdyaem says he is confident in his side tonight.

“Team spirit is starting to come back, and I want everyone to forget the nightmare that has passed,” he told Thai media syndicate, Siam Sports.

“The players, staff and administrative board have all united into a single unit in order to achieve Phuket’s goal of getting promoted to the Thai Premier League. Therefore, I want everyone to forget the past and turn to focus on tonight’s match against Krabi, which we need to win in order to get back on track,” he said.

Some more bad news that Islander fans will need to get over is a decision by the team to release two of its skillful Thai players, with the club in the process of ending the contracts for veteran defender, #4 Nonthapan “Berm” Jiensathawong and recent signing, #23 Kritsada “Por” Sakeaw.

According to the Thai sports media syndicate, Siam Sport, the two idol-like players will be dismissed for “being undisciplined”.

One of Phuket FC’s managers, Niwat Nuisa-nga told Siam Sports that “Both of these players are definitely not in the team’s plans anymore.

“As for Nonthapan, he has not been disciplined and broke rules of the club. We’re preparing to send him back to his original team, SCG Muang Thong United [top side in the Thai Premier League].”

Mr Niwat said that this would be finalized by the second half of the season, or after 17 fixtures of the 34-fixture season.

He went on to explain that due to an injury early on in the season, Por has been unable and unwilling to join the team on any training practices for nearly five weeks now.

Moreover, Por was also named man-of-the-match in at least three matches this season, that the Gazette is aware of.

“Even though he gives the excuse that he is injured, we’re going to let him go because he doesn’t show the same spirit as several other players such as Dudu and Niran Panthong, who, although suffering from injuries, still join our practices.”

Other YL1 matches to be played tonight are as follows:

Win, lose or draw tonight, Phuket waste no time to hit the road, set to play Saraburi this Sunday in Central Thailand with a 6pm kickoff. The Islanders’ next home match after that will be on June 9 vs PTT Rayong.

Australian ‘Couple on the Run’ to tackle Laguna Marathon