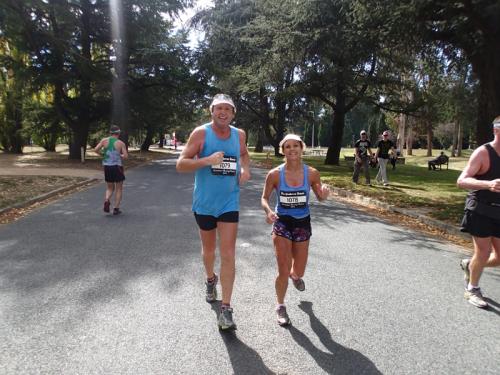 PHUKET: Australian ‘Couple on the Run’ Andrew and Sue O’Brien will take on the Laguna Phuket International Marathon on June 9 in the latest step of their worldwide running mission to promote shared exercise as a means of achieving personal goals.

Melbourne based Sue and Andrew became known as the Couple on the Run in 2008 when they ran eight marathons together in eight countries in eight weeks, a feat they later recounted in a best-selling book.

With more than 100 marathons under their belts, they live by the philosophy that harnessing the principles of exercising with a partner and applying this to other areas of everyday life enables people to achieve more.

They claim fitness is one part of the equation but plays only a small part, with greater benefits including shared motivation to get things started, commitment to regularity and enjoying quality time with one another – all leading to better understandings, shared goals and ultimately lessons in life.

At Laguna Phuket, Sue and Andrew will not only run the full 42 kilometer marathon, they’ll also capture the experience for the Partnerunning Media group incorporating their popular online Couple on the Run Webcasts and The Partnerunner Magazine. As well as present their philosophy to fellow runners and visitors in a live version of The Partnerunning Show.

“We’ve already sampled the course at Laguna Phuket and we’re really excited about taking part in this great marathon with all the many other runners from around the world who’ll be there,” said Sue.

“This event is one we’ve heard a lot about and with its range of race distances for all ages and abilities it really fits into our philosophy of harnessing running as a means to achieve personal goals.”

The O’Brien’s combine diverse yet complementary experiences – Sue is a fitness expert and former Australian triathlon representative, while Andrew is an award-winning CEO, corporate adviser and facilitator, and the creator of their Desired Futures and Partnerunning organizations.

These organizations aim to inspire and educate businesses and individuals to perform at their best by applying principles of vision, strategy, planning, communication, teamwork, relationships and fitness.

Andrew took up running in his 30s in order to improve his health and fitness after living an unhealthy lifestyle which resulted in Chronic Fatigue Syndrome. He met Sue during his efforts to regain his health and before too long decided to run a marathon as a goal for recovering from illness.

Mother-of-two Sue has worked in the fitness industry for more than 25 years and is now a sought-after speaker and workshop presenter. Before taking up marathons she was a regular winner of state and national age group triathlons and twice represented Australia at the World Triathlon Championships.

Online registration is available at www.phuketmarathon.com with special deals at Laguna Phuket hotels also on the website.