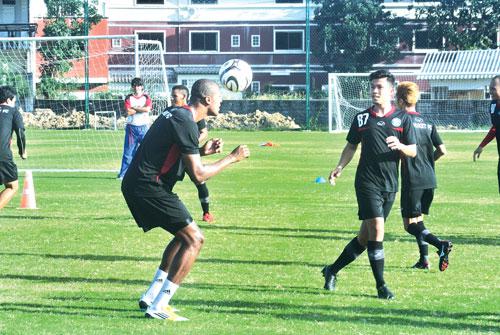 PHUKET: Following a month-long break, Phuket FC last week assembled its new-look squad for pre-season training in preparation for the coming Yamaha League One (YL1) season, which is set to commence in February, 2014.

Meanwhile, the club’s chairman and president announced a projected season budget of between 45 to 55 million baht – about the same as the 2013 season, but with less players on the roster.

Up to 17 new signings are expected to be finalized in the coming weeks, while six high-profile signings were formally announced last week, bringing the projected roster to 26.

The new confirmed signings, including two Brazilians and four Thais, were officially introduced to local media ahead of the pre-season’s first training session last Monday, December 16.

Speaking at a press conference last Sunday, Tales remarked: “I’ve come here to get results, and so that’s what my focus will be… I’m looking forward to working with my new team and hopefully we will have a shot at the Thai Premier League.”

Eber has won a total of 11 youth championships in Brazil with America Miero (6) and Cruzeiro (5), and has also competed in Canada and Sweden in recent years.

Phuket FC’s other Brazilian on loan from Cruzeiro, Cristan Alex – who joined in the club midway through last season – has also been confirmed on the 2014 roster and reportedly will be joined in Phuket this season by his wife and daughter from Brazil.

The Thai signings’ highlights include striker Wasan Natasan, 32, who most recently played for Thai Premier League side Bangkok Glass, and was a top scorer (36 goals) for three seasons on TPL team Chiang Rai United from 2010-2013. Wasan is a native of Chiang Rai.

Also with Chiang Rai on his resume is 32-year-old midfielder Rattapon Attawong.

A fourth new Thai signing is Prachaya Hong-In, a defender from Pattaya United, who has also worn the colors for Isaan United and Trat FC.

Although fans are thrilled that skillful Japanese defender, Yusuke Sato was confirmed on this season’s roster, many more fans are also saddened that Ivorian stalwart Nenebi Slyvester did not re-sign, having loyally served the club for four seasons (2010-2013).

“Teco joined midway through the season and had to work with what the old coaching team left him, so it’s not fair to measure him on this alone. We want to give him a chance to show what he can do… He’ll have the first three games to prove himself,” Pamuke said firmly.

Coach Teco later told the Phuket Gazette: “The pressure is on, but that’s what football is about. We’re going to start training hard for the next month and I think we’ll have good prospects.”

The coach, who is expecting his wife to give birth to his son as this paper goes to print, confirmed that the club plans to sign at least one more Brazilian and most likely a Myanmar national as an Asian reserve for Sato.

The current Asian Football Conference regulations allow a team to field one Asian player in addition to three non-Asians at any given time.

“After we confirm the new Brazilian and Myanmar players, that will bring our final number of foreign players to six – two Asians and four Brazilians. Altogether, we’ll have 26 players,” he concluded.

Keep checking our online Phuket Sports pages, join our Facebook fan page or follow us on Twitter @PhuketGazette for the latest local sporting news and action.