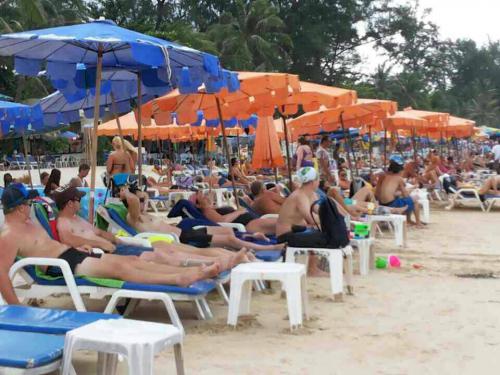 PHUKET: A German man collapsed and died in knee-deep water only meters from the shore at Patong Beach just before sunset yesterday.

Patong Police officers were called to the scene, in front the police box at the end of Soi Bangla (map here), at 6pm.

“When we arrived, lifeguards were administering CPR [cardiopulmonary resuscitation]. They continued for about 10 minutes, but the man did not regain consciousness,” Lt Col Pratueng Polmana of the Patong Police told the Phuket Gazette.

“Doctors continued efforts to revive him for almost an hour, but to no avail,” Col Pratueng said.

Born on Christmas Day 1969, Mr Gutknecht was to celebrate his 44th birthday next week.

A Patong lifeguard reported that Mr Gutknecht was relaxing on a beach chair next to his partner Karin Leibold before his demise.

“He drank a couple of bottles of beer then went into the water at about 5:40pm,” the beach guard said.

“Then we saw him fall down into the water, which was only about knee high. We rushed to help him and called a local police volunteer to get help,” he said.

Police are waiting for doctors at Patong Hospital to confirm the cause of death before completing their report, Col Pratueng said.