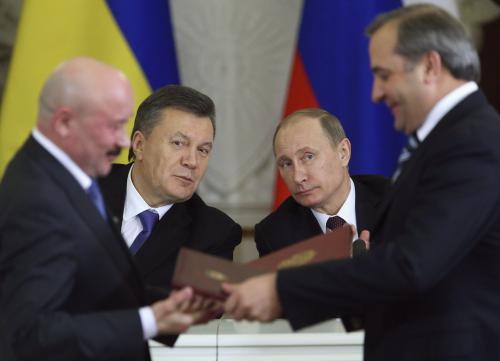 Among the panel’s proposals, made in the wake of revelations by former NSA contractor Edward Snowden, the most contentious may be its recommendation that the eavesdropping agency halt collection of the phone call records, known as “metadata.”

Instead, it said, those records should be held by telecommunications providers or a private third party. In a further limitation, the U.S. government would need an order from the Foreign Intelligence Surveillance Court to search the data.

“We don’t see the need for the government to be retaining that data,” said Richard Clarke, a member of the panel and a former White House counterterrorism advisor.

Across U.S. surveillance programs more broadly, “we tend to believe there should be further judicial oversight than there has been,” Clarke said.

It remains to be seen, however, how many of the panel’s 46 recommendations will be accepted by President Barack Obama and the U.S. Congress. The panel’s five members met with Obama at the White House on Wednesday.

NSA officials have staunchly defended the bulk metadata program, saying it is essential to “connect the dots” between terrorist plotters overseas and co-conspirators inside the United States.

“There is no other way that we know of to connect the dots,” Army General Keith Alexander, NSA’s director, told a Senate committee last week. “Given that the threat is growing, I believe that is an unacceptable risk to our country.”

Michael Morell, a former deputy CIA director who is on the White House review panel, said its members do not believe that its proposals for change “in any way undermine the capabilities of the U.S. intelligence community to collect the information it needs to collect to keep this country safe.”

In another major recommendation, the panel proposed five tests it said should be met before Washington conducts surveillance against foreign leaders.

Revelations in documents provided by Snowden that the United States spied on German Chancellor Angela Merkel and Brazilian President Dilma Rousseff have enraged those countries’ citizens.

Brazil on Wednesday awarded a $4.5 billion contract to Saab AB to replace its aging fleet of fighter jets, after news of U.S. spying on Brazilians helped derail U.S. firm Boeing’s chances for the deal.

“The NSA problem ruined it for the Americans,” a Brazilian government source said on condition of anonymity.

Before spying on foreign leaders, the panel said, U.S. leaders should determine whether such surveillance is merited by “significant threats” to national security, and whether the nation involved is one “whose leaders we should accord a high degree of respect and deference.”

U.S. leaders also should determine whether there is reason to believe the foreign leader has been duplicitous, whether there are other ways to obtain the necessary information, and weigh the negative effects if the surveillance becomes public, the panel said.

It said the U.S. government should explore agreements on spying practices “with a small number of closely allied governments.”

Obama said earlier this month in a television interview that he would be “proposing some self-restraint on the NSA” in reforms that the White House has said will be announced in January.

White House press secretary Jay Carney said some of the outside panel’s recommendations could be accepted, others studied further, and some rejected.


Putin gambles on Ukraine bailout
Reuters / Phuket Gazette
PHUKET: President Vladimir Putin has taken a gamble with Russia’s own fragile economy by bailing out Ukraine for the sake of keeping it in Moscow’s orbit and out of the European Union’s embrace.

His finance minister, Anton Siluanov, defended Tuesday’s deal in the Kremlin with Ukrainian President Viktor Yanukovich, which offered Kiev $15 billion in credits and slashed a third off the price it pays for vital Russian gas supplies.

“I believe that Russia only won,” Siluanov told Reuters on Wednesday, dismissing as baseless concerns the accord might damage Moscow’s own credibility with investors.

The deal has boosted demand for Ukrainian government debt and its currency, the hryvnia.

But Russia has had to tap into a rainy-day fund to afford the bailout at a time when its own economy, driven by energy exports, is in trouble. And it is not clear what it gets in return bar influence over the second most populous ex-Soviet state, whose 46-million population is a third that of Russia but whose ailing economy is less than a tenth the size.

Ukraine’s leaders also face risks. Although Ukraine’s prime minister hailed as historic a deal which offers his indebted nation at least temporary economic respite, it could swell numbers at anti-government, pro-EU protests in the capital.

About 3,000 protesters were camped behind high barricades in a central Kiev square after opposition leaders called for mass rallies to bring down Yanukovich for “selling out” Ukraine’s national interests and independence to its historic overlord Moscow – and spurning a free trade pact with the EU.

The $15 billion, to be spent on purchasing Ukrainian government debt, may seem like small change for a vast, resource-rich country that sits on half a trillion dollars in foreign exchange reserves and has a strong ability to borrow.

But with Putin himself acknowledging that Russia’s more than $2-trillion economy is too dependent on oil and gas and is heading for short-term stagnation, there could soon be economic and political costs: “It is a drop in the ocean,” a Russian government source said. “But it could become a painful drop.”

The latest official economic forecasts envisage Russia’s gross domestic product growing at an average annual rate of 2.5 percent over the next two decades, less than the global average and much slower than some of its emerging-market peers.

Not everyone at the Finance Ministry, which manages the National Welfare Fund from which money will be taken to buy Ukrainian Eurobonds, is happy that cash supposed to be kept for helping Russia’s growing population of pensioners will be used to aid an impoverished neighbour, government sources said.

The Finance Ministry is having to change the rules to let the Welfare Fund invest in Ukrainian debt because Kiev’s credit rating is lower than the Fund’s charter permitted.

It’s geopolitics, not the economy

Putin is widely seen as having put geopolitical interests ahead of financial concerns as he tries to woo Ukraine into a political and economic union of former Soviet republics which he wants to stretch from the Pacific to the EU’s borders.

Christopher Granville, managing director of Trusted Sources, an emerging markets research group in London, said the Russian taxpayer and economic stability were “being put at risk in the interest of the geopolitical quest”.

Putin regards Ukraine, with its large population, mineral resources and ability to act as a bridge to the EU market, as vital to the su