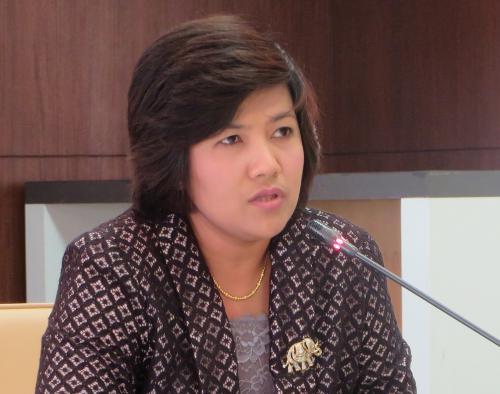 PHUKET: The Phuket Election Commission (PEC) has sent a formal request to Bangkok asking for permission to re-open registration so more candidates can contest the February 2 national election.

“It’s not fair to hold an election with only one candidate. There is no choice for the people,” Tassaneeya Srirattanaprapan, chief of the PEC’s Political Party Division, said at a news conference this morning.

“Also, Phuket has two seats available for MPs [Members of Parliament]. I have heard that more people want to register to contest the election,” Ms Tassaneeya added.

Candidates nationwide had from December 28 through January 1 to register.

In Phuket, however, protesters led by former Rassada Mayor Suratin Lian-udom staged a blockade of Phuket Community Hall (map here), which prevented all but one candidate from registering (story here).

“I have asked the Election Commission in Bangkok to consider re-opening registration for candidates. I believe my request is being considered,” Ms Tassaneeya said.

“Meanwhile, the EC in Bangkok has sent a request to Prime Minister Yingluck Shinawatra urging her to ask HM King Bhumibol Adulyadej for permission to postpone the February 2 election,” she told the Phuket Gazette.

Ms Tassaneeya said that support from the community to hold the election in Phuket on February 2 had been poor.

“We sent requests to 136 businesses in Phuket to ask for space to advertise the upcoming elections. Only nine businesses bothered to reply to our requests. Thankfully, those nine gave their support,” she said.

Ms Tassaneeya suggested that fear of reprisal by protesters might be preventing businesses from voicing their support for going ahead with the polls in Phuket on February 2.

Phuket Customs yet to enforce new rules for boat stays