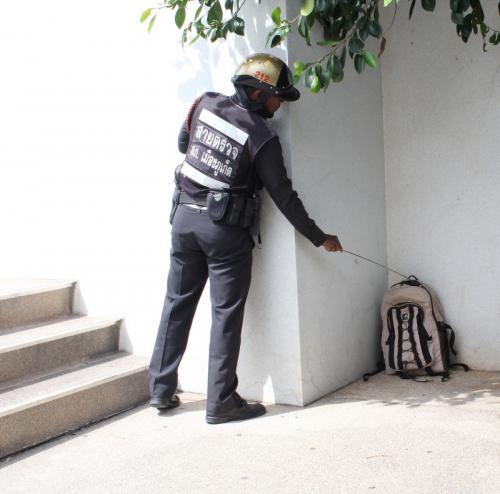 PHUKET: A lottery ticket seller raised the alarm of a potential backpack bomb outside of a Phuket bank yesterday. However, a police investigation revealed only various female garments, including underwear.

“She saw a teenager put several things in the bag and then drop it near the stairs of the Kasikorn Bank branch on Chana-Charoen Road. She got scared, and asked a friend to call the police,” said Maj Ratthakhet of the Phuket City Police.

The police received the call at 1:20pm and rushed to the scene.

At the bank branch, police found the backpack on the ground about 10 meters away from the stairs near the entrance of the bank. They set a perimeter and directed customers to exit the bank through a back door.

“We used a steel bar to carefully open the bag,” said Maj Ratthakhet. “When we opened it, we found female clothing and underwear.”

The owner of the bag can reclaim it at the Phuket City Police Station.

The “underwear bomb” is the second reported bomb scare since a Deep South car bomb was found parked in the Phuket City Police parking lot in December (story here). The first suspicious bag turned out to contain nothing but shrimp paste (story here).

Tiger Disco trial over inferno deaths to start next month