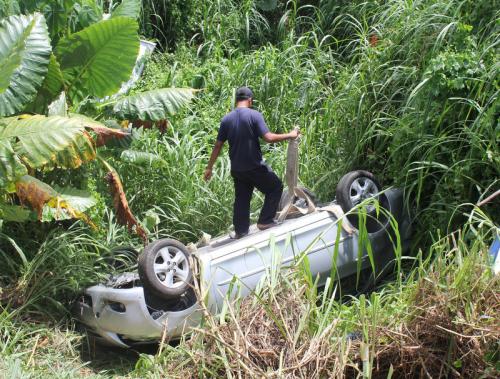 PHUKET: A woman was run off the road by speeding drivers as she pulled out of the Esso gasoline station on the northbound lane of the bypass road (map here) this morning.

Frightened by the oncoming traffic, the woman missed her brake pedal and accidentally hit the accelerator, propelling her car over the curb, across a patch of grass and down into the canal below, Paisan Nakbumrung of the Thung Thong Police told the Phuket Gazette.

Supattra Thongwaew, 43, was in a state of shock when police found her. However, she suffered no serious injuries despite the car plunging almost eight meters into the undergrowth in the canal below.

“When I was making a left-hand turn, I saw cars coming down the road at high speed,” she told police.

“I accidentally sped up instead of hitting the brakes, which caused the car to run down the hill and roll in the ditch.

“I could not get out of the car until a villager came to assist me,” she added.

There was no serious damage to public property, so Mrs Supattra has contacted her insurance and will pay for the damage to her car herself, Sub Lt Paisan said.