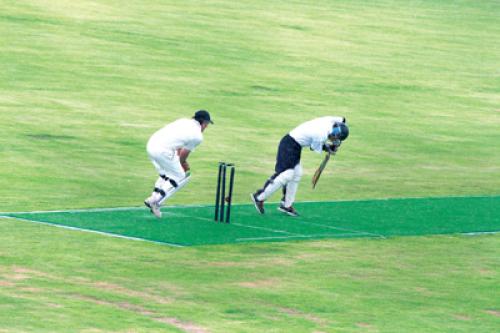 Teams from Australasia and Asia joined local outfits to play in matches consisting of five overs per side.

“The ACST (Asian Cricket Sixes Tour) are greatly indebted to Alan Cooke for allowing the use of such a magnificent venue and to the Phuket Cricket Group (PCG) for their huge assistance in staging the event.”

The ground, which has recently hosted the MCC (Melbourne Cricket Club) and Singapore CC, looked in perfect condition and the teams made use of the excellent playing surface with some scintillating play.

The Wolfpack from Perth looked to put in the early running with a fine total of 81 against the PCG, who in turn replied with a brave 72, as Jack Joy and Scott Smith scored the runs to secure victory. Andrew McMillan’s 23 runs for the PCG were not quite enough.

Galah’s CC of New South Wales defeated the ACST by restricting their opponents to 48 from five overs before David Newham and local youngster Pao, led the Goulburn side to victory, despite Jeremy Smith taking 2 for 6 in his over.

The CBB’s chased down the 43 made by the local Dabanng Boyz with Stuey Kaschula opening the reply with a huge six into the lake at the bowlers end.

The Wolfpack looked well on their way to victory with some lusty blows flying out of the sumptuous venue from the leaky ACST bowling. Scott Maitland was forced to retire on 35, which was probably as well for the panic stricken attack.

In the paired match, The Galah’s scraped together 46 as Tim Christie bagged two wickets against the CBBs.

Unfortunately, the weather took a turn for the worse, with the arena being hit by heavy rain, leading to an early conclusion to the day’s play.

For further details of the event, visit: phuketsixes.com or contact the Tournament Referee Ian Liddell on: 085 239 8254.