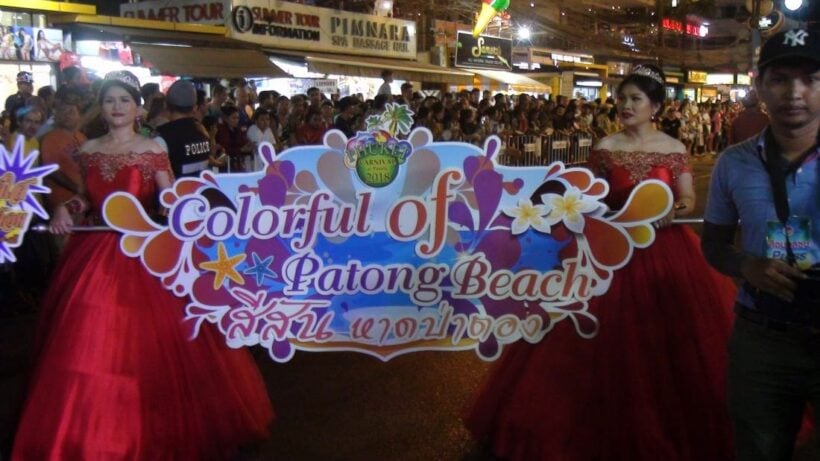 More Than 30,000 oThai and foreign tourists, as well as Phuket residents lined the streets of Patong last night to usher in the annual Patong Carnival, held each year to mark the beginning of the tourism high season.

Titled “Colorful of Patong Beach”, the grand opening parade was a lot better than the Organiser’s grammar.

Mayor Chalermluck chose to turn her welcoming remarks into a PR rally for the town.

“There are more than 80,000 rooms in hotels and resorts in Patong but still not enough for tourists in the high season.”

“Even though the number of Chinese tourists has dropped we are continuing to publicise to attract more tourists from Middle East countries, India, Russia, South Africa and Australia to come to Phuket.”

Khun Kritsada says, “Numbers of tourists during the past 2-3 months have decreased, especially Chinese tourists. However from this month more European tourists are  arriving and more than 80 percent of the town’s rooms have been booked.”

“Direct flights from Indian to Phuket are at least three flights per week. We expect that more tourists are coming to Phuket during the high season, same as every year.”

9 years of providing Phuket’s lifeguards comes to an end