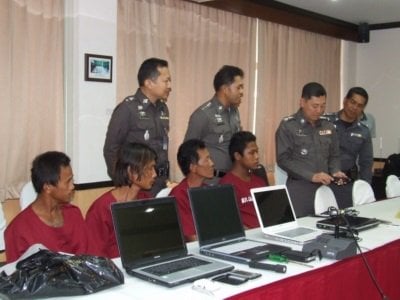 PHUKET: When Phuket police eventually arrested four men in connection with a spate of car break ins in Phuket City, they found the suspects in possession of stolen laptops, a camera, mobile phones, a diamond ring, guns, marijuana and tools for breaking into cars.

Three of the men are suspected of breaking into more than 30 cars parked along Thalang, Yaowarat and Krabi roads in Phuket City over the past few weeks.

The fourth, a second-hand shop owner, is alleged to have bought the thieves’ booty from them, knowingly receiving stolen goods. He has also been charged for possession of illegal firearms and the confiscated marijuana, which is classified as a class-5 drug.

The four – aged between 19 and 42 – were arrested in a sting operation at Sapan Hin Village on Tuesday morning after police had staked out the suspects’ homes following numerous complaints from car owners who’d been targeted by the gang.

The suspects were paraded in front of the media on Wednesday, where the youngest of the four admitted using a screw driver to pry the car windows and break them so he could grab whatever valuables had been left on the seats.

He said his technique allowed him to break into cars even if they were fitted with alarms because he would not open the car doors. He would then brush the broken glass under the car to avoid any passers by noticing his handiwork.

At the press conference, Phuket police chief General Pekad Tanitpong warned that second-hand shops operating without proper licenses can be fined, and that any second-hand shop proprietor handling stolen goods could easily be found out and arrested, because they often deal in items not available elsewhere, such as copper wire and manhole covers.