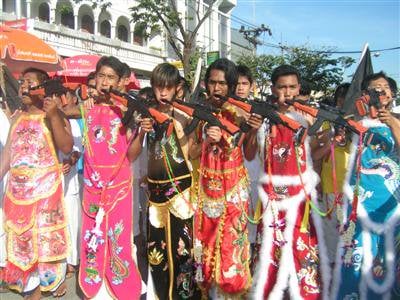 PHUKET: A Phuket City policemen who claims he was possessed by gods over 30 years ago will once again shower himself in boiling oil during the upcoming Vegetarian Festival.

Police Senior Sergeant Major Pisit Kunsong, 54, is one of many mah song (literally, “entranced horses”) spirit mediums who plan to be possessed by the spirits of Chinese warrior gods over the nine-day festival period that begins on Sunday, October 18.

Officer Pisit’s tale began at the Vegetarian Festival of 1976.

As he watched a procession of mah song pass by, the skeptical young Pisit accused one of the entranced ‘warriors’ of faking his condition.

The man told Pisit to attend a mah song ceremony at the Jui Tui Chinese temple in Phuket City later that night.

At the temple, he still refused to believe it – and made that fact known in provocative fashion.

“I stubbed my cigarette out on the head of a statue of a god,” he said.

In the days that followed, every time the young policemen heard beating drums at the festival he would feel ill – yet numerous trips to the doctor found no signs of illness.

A Chinese elder finally revealed the stunning truth: “You looked down on the gods. Now they have chosen your body as a vessel.”

Since then, officer Pisit has taken part in every Phuket Vegetarian Festival, chanting in Chinese and spreading the purification messages of the spirit he believes possesses him.

He has done the boiling oil ritual during every year for the past decade, and every year he has been protected from harm by the same deity.

“The spirit who commands me was an ancient Chinese general,” he said.

Needless to say, Pisit now believes in the powers of the mah song.

To purify himself sufficiently so that the spirit will enter him he has abstained from meat since June this year.