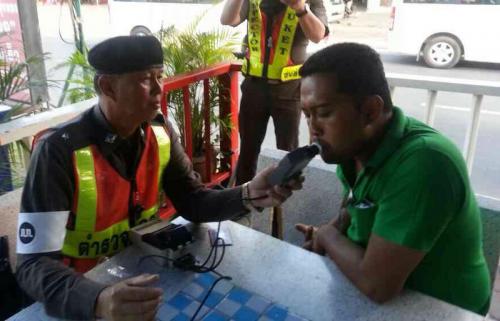 PHUKET: Law enforcement officials are randomly testing bus drivers for drugs and alcohol during the 10 Days of Danger, and in two days have found three drivers working under the influence.

Within Phuket, Thung Thong Police and Phuket Land Transport Office (PLTO) staff are stopping buses at the Thung Thong checkpoint on Phra Barami Road (map here) before they head over the hills to Patong.

“Since Wednesday, we’ve tested 18 bus drivers headed to Patong and found one that had more than the legal limit of alcohol,” PLTO Chief Terayout Prasertphol told the Phuket Gazette yesterday.

“At the bus station we have tested 88 drivers, and two tested positive for drugs,” he said.

“A lot of people are traveling to and from Phuket during this holiday period. We want to make sure the drivers carry them safely to their destinations,” he said.