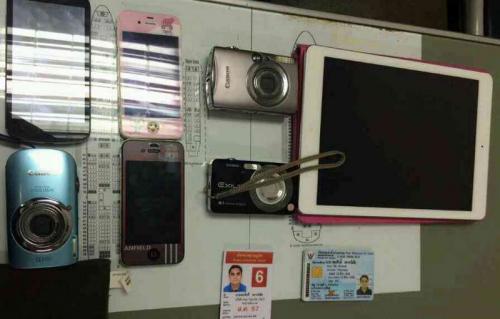 PHUKET: A technologically handicapped baggage handler at Phuket International Airport was arrested for theft after having been outwitted by a savvy Chinese Apple user.

Mr Somsak might have gotten away with the theft from Ms Yang’s luggage had he not decided to take advantage of his newly acquired piece of technology by taking a picture of himself.

What Mr Somsak didn’t know was that Ms Yang’s iPad was connected to her Apple computer at home. Ms Yang, who realized her iPad was missing when she arrived back in China, quickly copied three of the photos the suspect took of himself and sent them to the airline she was traveling with, China Southern Airlines.

“We were notified by airline officers of the incident and sent a team down with the pictures to identify the suspect. We found Mr Somsak at the conveyor on the first floor,” Tah Chat Chai Police Inspector Sarawut Chuprasit said, and he “confessed to stealing the iPad,” the policeman added.

Officers then went to Somsak’s rented room in Sakoo and found an iPad Air, three smart phones and three cameras.

He was charged for theft at an airport, Col Sarawut said.