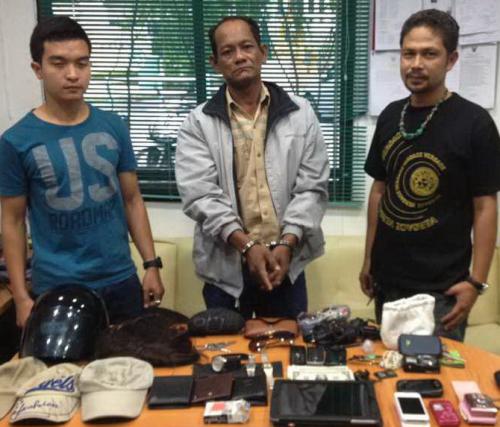 PHUKET: A 42-year-old drug addict confessed to attacking a Russian woman and multiple accounts of robbery after he was arrested by Karon Police on Boxing Day.

Boonrit Saeteaw was nabbed after having stolen several items on Christmas Day, including a mobile phone. His failure to turn off the phone’s GPS system, allowed police to track him down, Lt Col Teeradej of the Karon Police explained.

“We checked the GPS and were able to locate where he was staying. We then rushed to the hotel to make the arrest,” Lt Col Teeradej said.

Mr Boonrit was snared at the Sukjai Hotel on Komaraphat Road at about 7pm. Police seized 30 ya ba (methamphetamine) pills, five mobile phones, two cameras, US$100 in cash, an iPad, a woman’s wig and various other items.

Many of the items found were stolen from a house on Patak Road in Karon on December 25.

“Three mobile phones, a camera, an iPad and 20,000 baht cash were reported stolen from the house,” Col Teeradej said.

After his arrest, Mr Boonrit also confessed to robbing a house at Pure Pam Village in Soi Patak 1 on December 6. Thirteen days later, he robbed a tourist’s room at the Heavenly Inn hotel in Karon.

“I stole property from a Russian tourist’s room at the Heavenly Inn… I also attacked her before running away,” Mr Boonrit confessed.

“I use the money to buy drugs,” he said.

Mr Boonrit was charged with theft, receiving stolen property and possession of a Category 1 drug.