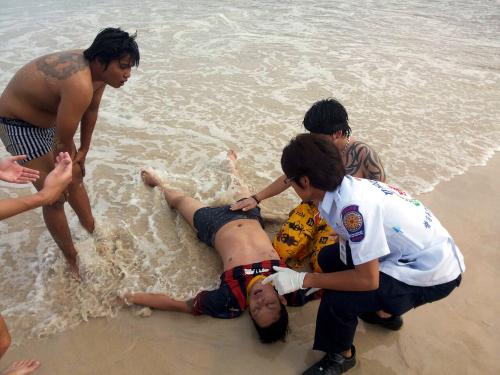 PHUKET: Friends of an intoxicated Phuket bartender saved him from drowning this morning after he decided to go for a swim at Patong Beach.

Surachai Junmee, 29, and five friends were drinking at Loma Park (map here), after they got off work at about 2am, Patong Police Capt Teerasak Boonsang explained.

“At about 6:30am, by which time they were quite drunk, they went for a swim – but Mr Surachai was carried away by the waves and disappeared,” he said.

“His friends searched for him, and eventually found him and pulled him out of the water,” Capt Teerasak said.

Mr Surachai was unconscious when pulled from the surf.

“He was taken to Patong Hospital and was admitted to the Intensive Care Unit,” Capt Teerasak said.

Patong Hospital staff confirmed to the Phuket Gazette that Mr Surachai has recovered from his ordeal, and has been discharged.