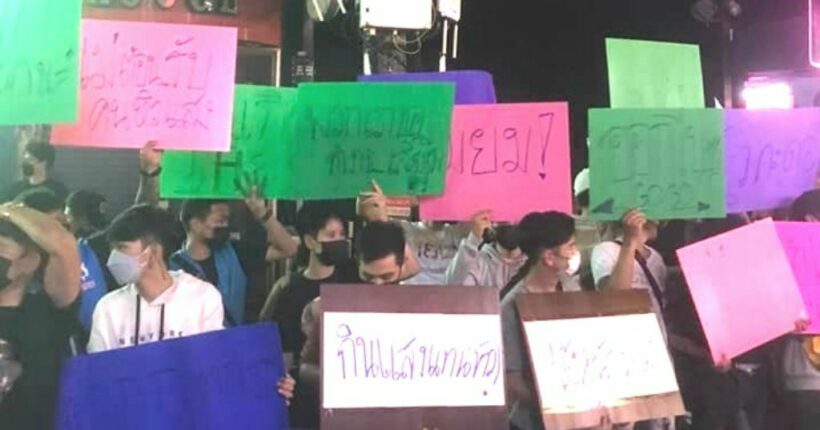 Nearly a hundred bar owners and staff gathered at Patong Bay Hill Resort in Phuket yesterday to protest the recent “extension” of official alcohol sales to midnight. The group said the operating hours of the entertainment zone in Phuket and Pattaya should be extended to 4 am.

They also demanded the government stop calling them “restaurants” (after they apply for SHA+ registration under the current guidelines as bars and nightlife are still to remain closed, officially).

The protest follows Friday’s CCSA announcement that it would extend the daily cutoff time on alcohol sales in the kingdom from 11pm to midnight.

It also comes one week after the celebrity lawyer Sittha Biabangkird walked into the Patong Bay Hill Resort after local residents contacted him because, allegedly, police had not responded to their many complaints that the Patong Bay Hill Resort’s bars and entertainment areas had frequently, and noisily, been serving foreign and Thai partiers well past the official cutoff time.

The lawyer’s video went viral, featuring patrons partying well past the official closing time, prompting the authorities to close the hotel’s bars. Out of work, the hotel’s staff took to Bangla Road to stage a protest the next night. Senior Patong police have been sidelined over the matter and banished to ‘office duties’ at regional HQ until an investigation into the allegations is completed.

This latest protest, which took place yesterday, was held to support and cheer on the owner and staff of the Patong Bay Hill Resort. People from Phuket’s nightlife scene visited the hotel, presented flowers to its owner and put up signs with encouraging messages, such as…

“We’re rooting for you.”

“Everything will be okay, I believe in you.”

According to The Pattaya News, the protesters claim the midnight extension, which will come into effect on May 1, aren’t enough for the nightlife business areas of Phuket and Pattaya. Instead, the operating hours should be extended to about 4am, as it used to be before the pandemic.

They promised to keep protesting until the government relaxed the restrictions and conceded to their demands.