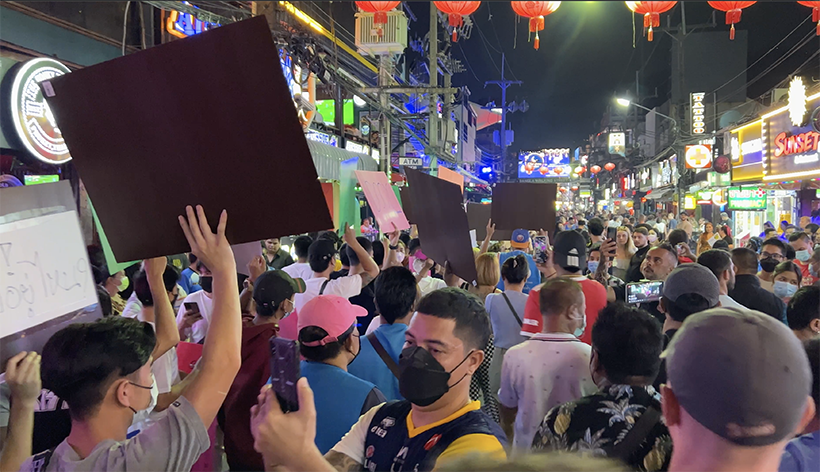 The disgruntled staff of a Phuket hotel that was being used for late night parties have staged a protest on Phuket’s Bangla Road Walking Street, after their hotel was ‘outed’ for violating Thailand’s alcohol sales laws under current Covid-19 restrictions.

The hotel had been operating as a defacto nightlife venue, assumedly away from the hustle bustle and attention of Bangla Road, for months.

Police closed down the hotel after a celebrity lawyer posted a video on Facebook showing late night partying at the venue during Songkran, including alcohol sales to tourists after 11 pm, the official cutoff time under the current raft of Covid restrictions.

Angry and out of work, the hotel’s staff marched on Bangla Road Walking Street to protest the legal whistleblower and subsequent crackdown. Lawyer, Sittha Beerbangkird shared the video of the bar on his Facebook page. It’s already attracted 350,000+ views.

According to Sittha, nearby residents had long complained to him and local Patong police about the noise coming from the Patong Bay Hill Resort claiming that it often opened beyond the curfew hours. He claimed the the residents sought his help to expose the hotel on social media because local authorities had continued to done nothing about it, despite numerous reports and even the public flouting of the breaches from participants on social media.

The lawyer drove to the Patong Bay Hill Resort at 2am and posted a video featuring crowds of partying tourists. In his post, Sittha alleged that the hotel had been operating overtime and violating Covid-19 restrictions for years. He said, as far as he knew, the bar didn’t even have a license.

He also claimed it was impossible that no one in authority knew about the bar, and speculated that there might be a bribe going on under the table. His video quickly went viral, resulting in the operations of the hotel being temporary closed.

During the pandemic, technically still a national emergency in Thailand, the CCSA allows bars in the yellow and blue zones, that ‘convert’ into restaurants, and receive full SHA+ approval to open, to serve alcohol until 11pm. After that time, alcohol sales are illegal.

However, this venue was was caught fully operating as a nightlife venue – complete with loud music, alcohol and customers (mostly foreign) – well past the cutoff time.

In the video, the lawyer said it was 2am, but the bars were still open. He emphasised that noise from the bar had been annoying residents living nearby, prompting them to seek his help and report the issue because the authorities had allegedly ignored it.

After his video went viral, the bars and nightlife at Patong Bay Hill Resort were ordered to close temporarily. In response, more than 50 bar staff, who have lost their jobs, went to Bangla Walking Street to protest.

They displayed various signs and banners complaining to the lawyer, with messages like…

“We are hungry, and it’s for food, not for reputation on social media”

“We do not welcome anyone who wants a spotlight”

“Mind your own business!”

The Patong Bay Hill resort management and owners include a number of high profile Patong businesspeople.

The protesters added that Patong residents understood their own situation as they were born and raised. They said Patong was a tourist destination with no rubber plantation or palm plantations, so they had to do what they did to earn a living.

They added that no one had taken care of them since the pandemic hit, and residents had to survive on their own.

Some Thai netizens replied to the on the post, saying they had spotted bars near their houses doing the same thing. Others warned the lawyer to beware as there might be some influential people involved. Many netizens said they understood the situation of the staff, but everyone should follow the rules.

They also noted that if Phuket can open bars, seemingly with little restrictions, then other provinces should be allowed to do the same.