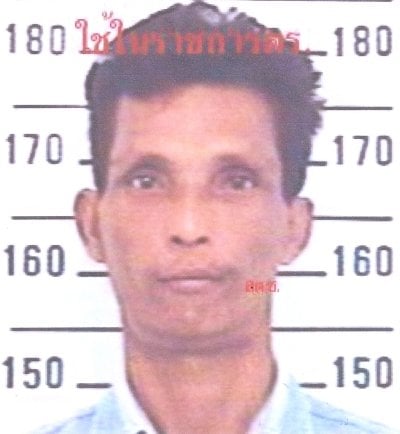 PHUKET: After 17 years on the lam, a suspect wanted for a 1994 stabbing murder of a man in Uthai Thani province was arrested by Phuket City Police yesterday.

The suspect, 44-year-old Pornsak “Nu” Ketkaew, was arrested when he took a 10-wheel dump truck for repairs at a garage off Thepkrasattri Road.

Mr Pornsak was arrested by officers who confirmed his resemblance to the picture in his arrest warrant, issued on February 12, 2004.

Investigating officers from that station were informed of the imminent arrest before it happened.

Sen Sgt Maj Thanakorn Piromthong of the Ban Rai Police investigation team said, “Pornsak confessed to us that he had a fight with a man who tried to attack him. He said he wanted to protect himself, so he used a pocket knife to stab the man in the chest.”

Mr Pornsak said he was acting in self defense and the stab was not intentionally directed at the man’s heart, the officer said.

The Ban Rai Police team, which arrived today, left Phuket at 5am to escort the accused back to Uthai Thani, where he will face charges of premeditated murder for the August 9, 1994 stabbing in Khok Kwai district.

“We kept tracking Pornsak ever since the murder, but he kept moving to different parts of the country, including Prachuab Khirikhan and Phuket,” said Sen Sgt Maj Thanakorn.

“He told me that after the murder he was afraid he would be targeted for a revenge killing, so he fled with his wife and two-year-old daughter,” he added.

Working as a truck driver in Phuket, Pornsak went to have a new license issued after the old one had expired.

Police used the information to track him to Phuket, then liaised with the Phuket City Police to bring the man to justice after almost two decades on the run.

Phuket Tourist Police in the spotlight