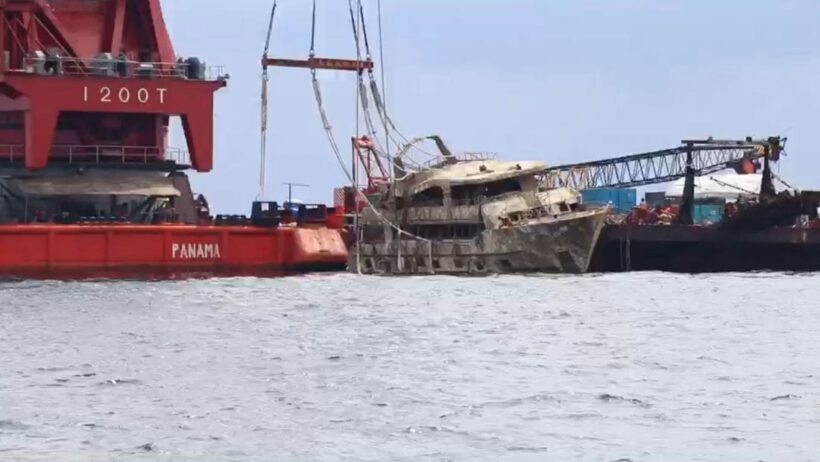 The vessel, that is at the centre of Thailand’s dramatic drop in Chinese tourists, will arrive back at a boatyard in Rassada today.

Back on July 5 it headed out for a day of diving near Koh Hei, south west of Phuket. The day was mostly fine although there had been warnings from early in the morning about potentially bad weather developing later. Smaller boats had been warned to stay ashore.

The impact of the tragedy was partly softened by the international fascination in the Mu Pa football team who were being rescued from the Chiang Rai cave at the same time. The interest in that story surely softened the potential full media impact of the story. News editors around the world would have thought ‘one story from Thailand is enough’ for the nightly news.

But the story still played out, badly, especially in Chinese social media. In the hours after the full extent of the tragedy emerged, and as the search was still continuing for survivors, the Thai PM Prawit Wongsuwan said the event was ‘Chinese killing Chinese’, (referring to the revelation that the owner of the boat was a Thai nominee company acting on behalf of a real Chinese ‘owner’).

The first attempts at salvage were a sham. Photos send from participating divers showed water tanks and cables in a make-shift effort to refloat the sunken vessel. The attempt was doomed before it even started; the true tragedy being the loss of one diver’s life during the operation which was never going to work.

But after a week of preparations from a Singapore firm, the Phoenix, four and a half months later, returned to the surface with signs that the seabed was already reclaiming the wreckage. It emerged in a well-orchestrated media show, on cue, around 3.30pm yesterday.

When it finally reaches the Rassada boatyard there are some key elements police want to check that will finalise their report and become part of the prosecution evidence in the court cases.

Who was responsible for the boat’s sinking? Could it have been avoided? Who set up the company with the local nominee? Was the Captain or crew liable in their duty of care for the passengers on the day? Was the original design of Phoenix ‘fit for purpose’? Who were the officials that signed off on the design and building specifications for Phoenix? Indeed, was the naval architect of the vessel qualified to design such a boat? What was the limit of passengers for the boat? Should Phoenix been out in the open seas that day? Did the company know of the day’s weather forecast? (Even The Thaiger posted a screen-saver of the approaching storm during the afternoon). Was Phoenix carrying the required safety gear and was the safety gear ‘fit for purpose’?

The answers to these and many other question will now be meticulously sought by experts, lawyers and officials. No dates have been set for the court cases at this stage. But it has already been reported that the Captain of Phoenix, the Thai owner of the nominee company, the Phuket Marine Chief and several companies have already had charges brought against them.

At the time it was thought that the Chinese response to the Phoenix boat disaster would be quite swift but things would probably return to normal by the end of the year. In fact the immediate response was not a sudden drop in tourists. The Chinese who had already booked and paid for their holidays at the time, mostly came. But it was the ones who would have been considering a holiday to Phuket in the months after who have had the most effect. And the effect of their decisions to travel elsewhere is what’s being felt now.

The TAT, forever talking up the numbers of Thai tourism, say they expect the Chinese travellers to return ‘by the end of the year’. We will see.

Marine officials and tourist police have established a number of important new measures to improve marine safety around Phuket, including checks of all 24 ports on a daily basis, spot safety inspections, rigorous weather reporting and minimum specifications for all safety gear carried on tour boats.

Supervising the successful salvage, Maj Gen Surachete Hakparn made it clear that the “government is determined to get to the root cause of the incident so that it can remedy and show sincerity to them,” referring to the families of the Chinese victims.

He predicted that once the court cases have been run, convictions made and people have gone to jail, only then will any semblance of confidence might be restored with the Chinese tourists.

In the months since the sinking Chinese travel companies have been sending their customers elsewhere for their holidays. Whether Phuket’s heyday as a Chinese tourism favourite is over is yet to be seen.