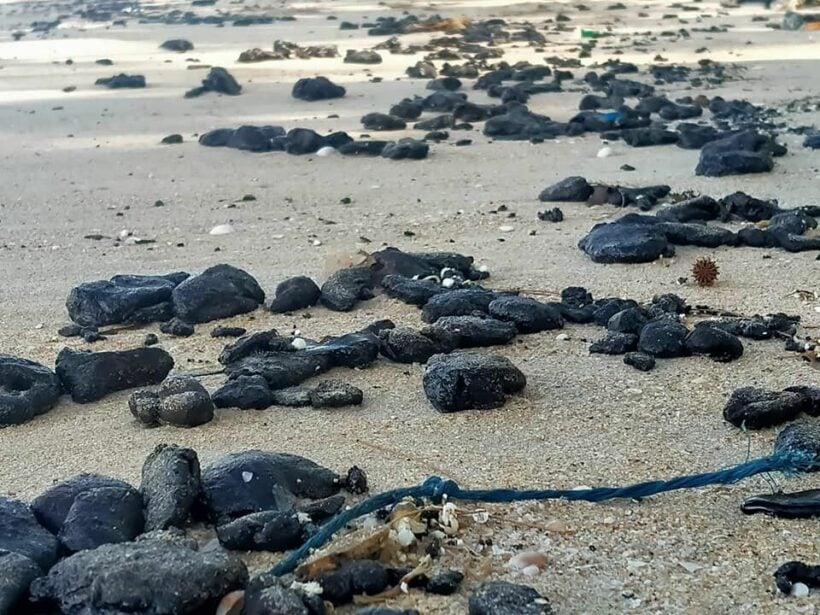 Just in time for Phuket’s grand reopening, an oil spill has been depositing tar balls on beaches running the entire length of the island’s west coast. Now Patong Beach, the 3 kilometre-long beach fronting the island’s most popular tourist town, has seen a slew of oil and marine debris washing up on its shores.

The tar balls were first found on the northern tip of Phuket island at Mai Khao Beach where clean-up crews today attempted to pick up yet another wave of oil deposits on the beaches.

Soon after first being spotted at Mai Khao beach, oil waste started washing ashore on the southernmost beach in Phuket, Nai Harn Beach. Tar balls were also being spotted on Kata Beach around the same time and Nai Harn Beach was later affected as well.

Then on Thursday, a 4.5-metre long sperm whale was beached in the waters off Bang Tao Beach with scratches on its eyes, tail and body, and with its nose covered in oil that also could be found smeared along the length of its body. It was rescued and taken to Phuket Marine Biological Centre for care.

This morning after seeing tar balls wash up all over Nai Yang Beach, the community-based environmental conservation group Sustainable Mai Khao posted photos of the oil debris and organised a beach cleanup. Starting at 3 pm the group gathered people they requested to bring rubbish bags along with gloves and plastic bags to protect shoes from the gooey tar balls. The environmental group broadcast several live videos of the clean-up efforts.

Some suspect a connection between the oil waste and tar balls plague the beaches of Phuket this week to the May 21 explosion and fire and subsequent sinking of the X-Press Pearl, a Singapore-flagged shipping container vessel off the coast of Sri Lanka. The beaches there have been overwhelmed by the aftermath – dead fish, turtles and birds with plastic pellets lodged inside them. The ship was full of various hazardous chemicals and, while an oil spill hasn’t been officially reported, the sheen of a slick can be seen in aerial photography.

The accident is being declared a massive environmental disaster with effects expected to reverberate throughout the world over the next year. Models predicted that by 2 weeks ago the debris would have spread east well past Sri Lanka, but they aren’t expected to make landfall in Southeast Asia until about 60 days out, well into July, making their accountability for the oil and tar balls on Phuket beaches questionable.

Craig
Better than my balls hitting Patong Beach.
EdwardV
So the one thing Phuket can sell at this point is now covered in tar. What’s next locust?
Vwwv
Those are part of the 600,000 domestic tourists that are supposed to arrive there.
PhayakPeter
A mountain of red tape and expense, restrictions on movement, phuket 95% closed and an oil slick. Sign me up??
Stardust
Karma at work!