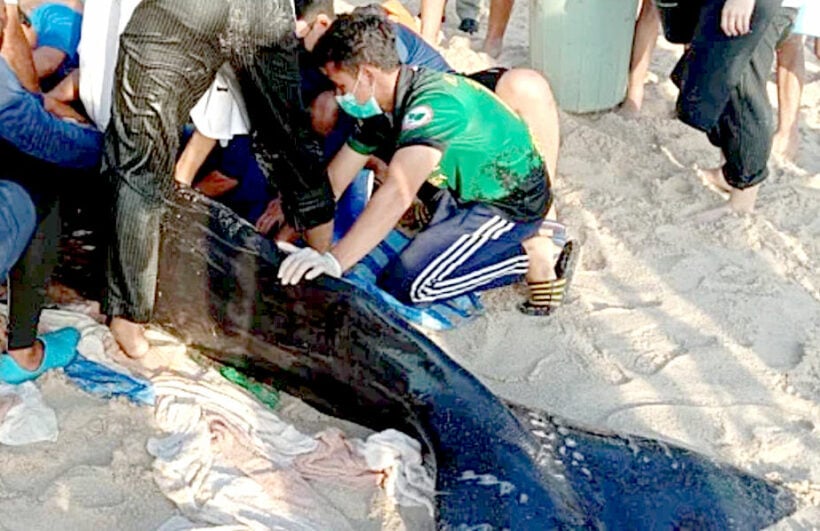 PHOTO: A beached spem whale was rescued in Phuket (via Wirun Chuasaman)

Animal rescue and care facilities often are tasked with coming out and taking a wild, sick, or injured animal into care, but it’s not often that it takes more than 50 people working together to take that animal in. That was the case yesterday, however, as rescue workers managed to collect a beached sperm whale with scratches on its body and covered in oil from Bang Tao Beach in Phuket.

The sperm whale is 4.5 metres long and was first spotted before 3 pm yesterdays by lifeguards on the beach. The whale was a bit offshore and at first the lifeguard thought the whale could be pushed back into the tides and freed. He enlisted other people on the beach and some staff from the Dusit Thani Laguna Phuket resort nearby, but even with the helping hands, they were unable to unbeach the whale.

Scratches were seen along the tail and body of the sperm whale, and further scratches were found near both of its eyes as well. Old was smeared across the whale’s whole body also, including covering its nose completely. Several beaches in Phuket have had tar balls, a byproduct of an oil spills or fishing ships dumping the oil from their engine holds, washing up on their shores lately. These may be coming from the same source that covered this whale in oil.

A security guard alerted senior staff at Dusit Thani about the sperm whale who then contacted the Cherng Talay Police on duty at a nearby police box. Eventually the Phuket Marine Biological Centre at Cape Panwa was called for help, and they dispatched marine life experts working for the Siritharn Rare Marine Life Rescue Centre which works from the centre.

They arrived at the scene with a rescue truck and examined the beached sperm whale. They determined the sea creature was injured and requiring care in their facilities. Their truck was near to the beach and a group of more than 50 people banded together to lift the approximately 1 tonne whale and carry it across the beach and loaded onto the truck.

The sperm whale has now been moved to the Phuket Marine Biological Centre for care and treatment to clean all the oil from its nose and body and treat the scratches as needed.

Lynda
Has this whale been released? Did it recover?

Lowseasonlover
He's having a Whale of a time

Bluesofa
4 minutes ago, Lowseasonlover said: He's having a Whale of a time   On 6/18/2021 at 1:11 PM, Thaiger said: Beached sperm whale covered in oil rescued in Phuket But not a beach party as that would no doubt contravene…

billywillyjones
For a minute there I thought maybe it was about a fat farang from Pattaya lathered in suntan oil. ?