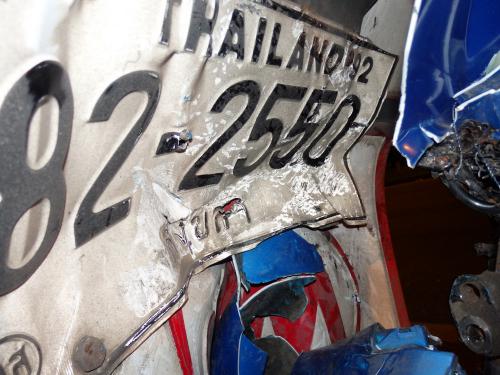 PHUKET: A 26-year-old man died early yesterday morning while he was heading home from work in Phuket Town after his motorcycle rammed into the back of an 18-wheel truck travelling slowly in the left lane.

Truck driver Wichet Boonsong, 43, from Phattalung, was delivering a load of sheet metal from Songkhla when he heard something crash into the back of his truck, explained Thalang Police Capt Chatree Chuwichian.

“The Phuket Sheet Metal Company is located opposite the Baan Nai Klum Mosque in Thalang. It was dark and he was not familiar with its location, so he drove past it.

“He did a u-turn at the new set of lights at the Baan Khaolarn intersection [story here] and drove back. When he saw the mosque, he slowed down to look for the company,” Capt Chatree explained.

“Suddenly he heard something hit the back of his truck, so he stopped and checked what it was,” he said.

Rammed under the tailgate, but still standing upright, was the motorbike of Kraisorn Srinonyang, 26, originally from Phayao Province in Northern Thailand.

“Mr Kraisorn was a mechanic in Phuket Town. He was riding home to Baan Muang Mai after work when the accident happened,” Capt Chatree said.

Police found a motorbike helmet, flattened at the front, more than 10 meters from the point of impact.

Not more than 30 minutes later, a tourist van heading toward Phuket Town overshot the curve at the Tha Rua Shrine in Koh Kaew (map here).

“The van, which belongs to the Andaman Express Travel Company, hit a power pole and fence,” Capt Chatree explained.

“The driver, Meka Thayathum, 37, was pinned in the van by the force of the impact, so Kusoldharm Foundation rescue workers used metal cutters to safely remove him from the vehicle and then took him to Mission Hospital,” added Capt Chatree.

“He broke his right arm and leg,” the policeman said.

“He said he was driving home to Phuket Town after dropping off tourists at the airport. He was travelling at speed when he reached the curve and lost control of the the van,” Capt Chatree said.