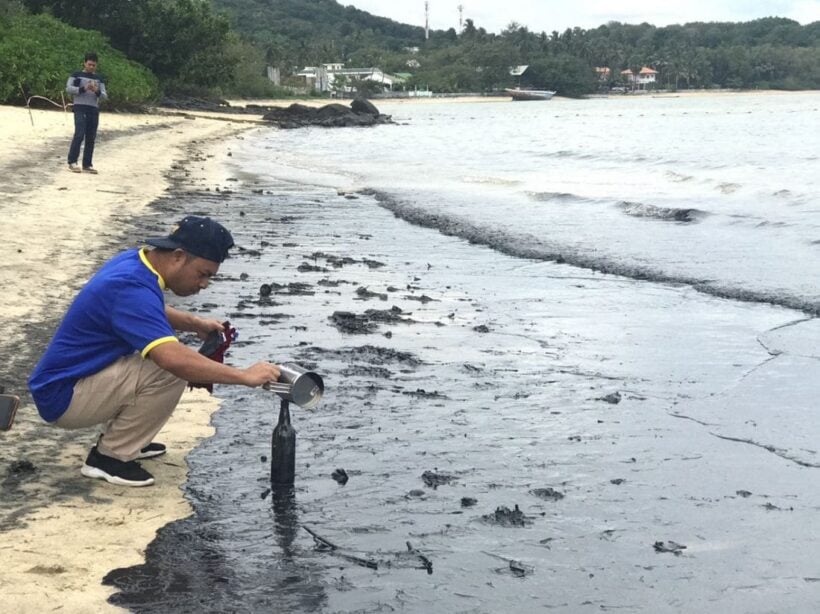 Black oil has been located on a Beach at Ao Makham in Wichit yesterday. It is believed to be from a big ship.

The Phuket Vice Governor Tanyawat Chanpinit, along with other officials, yesterday inspected the beach after the black oil was found on the sands along Tang Ken Bay.

Phuket’s Vice Governor Tanyawat says, “Oil has been found polluting 315 metres of the beach with a strong smell. It is believed that this oil is from a big ship.”

The sand stained with the oil is being removed from the shoreline whilst buoys have been put out to soak up some of the black oil from the water. Officials believe that it will take about two days to remove all the oil pollution along the beach.

Nattawan Jamlongkard, Chief of the Phuket Natural Resources and Environment Office says, “”We have checked the water quality and found that it hasn’t affected the environment at this stage (beyond the oil-stained beach). We have collected oil samples for further checking to identify the kind of oil and where it may have come from in order to find the source.”

The Acting Chief of the Phuket Marine Office Wiwat Chitcherdwong says, “We will file a report to police in order to identify suspects who may have released this oil. They will face legal action.”

At this stage officers believed that it is used oil that has been released into the sea.