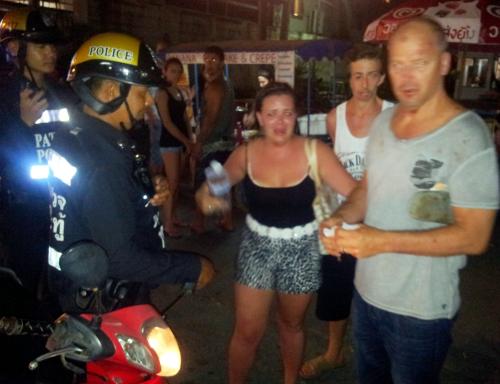 PHUKET: The South African family attacked near Soi Bangla (map here) after midnight on Tuesday morning said they “called for help, but nobody helped”.

The family of four – mother, father and two children in their 20s – were “hanging out near the beach road” when they were suddenly attacked, the father later told rescue workers.

Six men appeared “out of nowhere” and started to swear at the family and physically attack them, the father, 46, said.

“I don’t know who they were. I only remember a man wearing a red shirt was the one who started swearing at us. They hit us on our faces and bodies. We called out for help, but nobody helped us.

“As soon as we had a chance to escape, we ran for our lives – in separate directions,” he said.

The family later reconvened in front of Jungceylon and called police for help.

Shortly after 1:45am, police and Kusoldharm Foundation workers arrived on the scene

“We found the family in front of Jungceylon shopping mall [map here],” said a Kusoldharm worker.

“They said they had been attacked by six men in front of the Aloha Villa Hotel on Rat Uthit 200 Pee Road [about a block away from Bangla Road].

“They were clearly injured. In addition to marks on their heads and mouths, they had scratches on their bodies,” he said.

“They told us they were from South Africa,” he added.

The family has not yet filed a report with the police, Patong Police Deputy Superintendent Akanit Danpitaksat confirmed to the Phuket Gazette today.

“Police have asked the family to file a complaint at the station, so we can have more information that might lead to the arrest of the suspects. Besides, we need them to tell us more about what could have motivated the attack.

“However, because they haven’t filed a complaint, we are not working on the case,” Lt Col Akanit said.