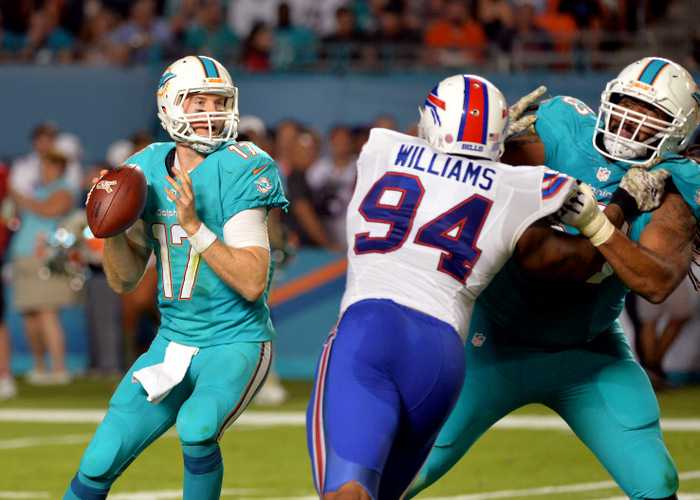 PHUKET: The Miami Dolphins’ hopes for an AFC playoff berth are rosier than ever after a solid 22-9 win at home over AFC East rivals the Buffalo Bills on Thursday Night Football, the first game of Week 11.

The win lifted the Dolphins to a respectable 6-4 and put them at the top of the pack in the hunt for a Wild Card playoff berth in the AFC, while Buffalo fell to 5-5 and would likely have to win out for a chance to slip into post season play – not likely given a very tough schedule that includes away games at both New England (7-2) and Denver (7-2), not to mention a home game against a resurgent Green Bay (6-3).

The Dolphins’ steadily improving young quarterback Ryan Tannehill was able to move the ball more steadily as the game went on, using a balanced attack featuring running back Lamar Miller (15 carries for 86 yards) as well as quick passes that effectively negated the Bills biggest weapon: its highly-feared pass rush.

Buffalo, under veteran QB Kyle Ortin, had trouble moving the ball but kept the game close in the first half. But the league’s worst red zone offence had to settle for just three field goals in each of the first four quarters and failed to convert on two big turnovers that left them in great field position.

In fact, the Bills’ anemic offense seemed to get worse as the game wore on, totaling just 15 yards total offense on its final five possessions.

A missed field goal and two horrific calls (“roughing the passer” and “intentional grounding” resulting in a safety) that worked against the Bills late in the game were the final nails in the coffin for a Buffalo team that had surprised many this season by even making it to five wins.

The real key to the win was the Dolphins’ solid defense, which held Ortin to under 200 yards and passing their leading back Anthony Dixon to just 35 yards on 10 carries.

Philadelphia Eagles (7-2) at Green Bay Packers (6-3): [4:25am FOX] Like most good matchups, this is a tale of two quarterbacks. Two-time Super Bowl champ Aaron Rodgers and his surging Packers will take on the Philadelphia Eagles under QB Mark Sanchez, the former New York Jets QB who is getting a new lease on life by filling in for the injured Nick Foles.

Both teams are coming off huge prime time wins, the Eagles in Sanchez’ first game a 45-21 rout of the Carolina Panthers, while the Packers turned in a showcase 55-14 demolition of a highly disappointing Chicago Bears on Sunday night.

The advantage has to go to the Packers at home, but a win by the Eagles could add more momentum to the fairy tale resurgence of Sanchez, who left the media circus surrounding his old team the New York Jets with the lingering memory of the infamous “butt fumble” and QB controversy with Tim Tebow.

New England Patriots (7-2) at Indianapolis Colts (6-3): [8:30am, NBC] The Colts, playing in the friendly confines of Lucas Oil Field, go in as slight point spread favorites against Tom Brady and the Patriots, who are coming off a bye week following a huge home win against archrivals for AFC supremacy the Denver Broncos (7-2).

With Andrew Luck, Indianapolis have the best young franchise quarterback in the game, but thus far Bill Belichick and the Patriots have had his number, including in their playoff game last year. The fans in Indy will no doubt be cheering to see this encounter reverse that trend.

Detroit Lions (7-2) at Arizona Cardinals (8-1): [4:25am, FOX] The teams with the two best records in the NFC face off in an inter-divisional game to see which will get fast-tracked to the top seed in the NFC playoffs.

Despite playing at home, the Cardinals will have to play without quarterback Carson Palmer, who went down with a season-ending ACL injury last week. His replacement for the remainder of the campaign will be respected journeyman QB Drew Stanton, who has appeared in four games this year with a 49.5 per cent completion rate, 614 yards and three touchdowns without a turnover.

Stanton will have his hands full on Sunday against the Detroit defense, the top rated unit in the NFL.

Seattle Seahawks (6-3) at Kansas City Chiefs (6-3): [1am FOX] After a shaky start, the reigning Super Bowl champs will take three straight wins into Arrowhead Stadium. QB Alex Smith and the Chiefs are not a high-powered offense, but consistency and a strong defense has made them once again one of the hottest teams in the NFL, with four wins in a row.

Both of these teams play a lot better at home than on the road.