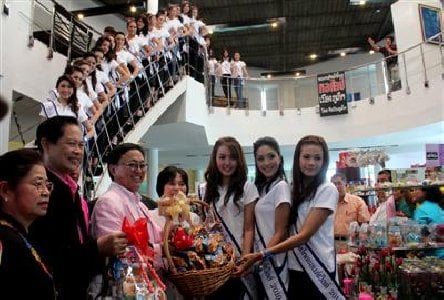 Located near the Mining Monument, the One Tambon One Product (OTOP) outlet is a PPAO project built in part of the long-derelict Lucky Complex building.

Not yet officially open, the two-story shop has an OTOP showroom on the ground floor and a small art gallery above, up a spiral staircase.

The thirty beauties, who were encamped at the Cape Panwa Hotel Phuket for three nights starting on Tuesday, have taken part in a variety of activities while on the island.

Their final activity before flying out Friday was a visit to the Baan Laem Sai School in Tambon Thepkrasattri, Thalang.

Under the theme ‘Beauty has value in Thai education’, the contestants took part in a batik painting activity to create colorful new curtains at the seaside school.

The contestants also drew lots to see which lucky six would be taken to the seaside in a pram, one of the many photo opportunities that have taken place during their stay on Phuket.

Now back in Bangkok, the beauties are taking part in more activities leading up to the night of August 15 when one of them will be named Miss Thailand World 2010 during a live televised broadcast from Bangkok.