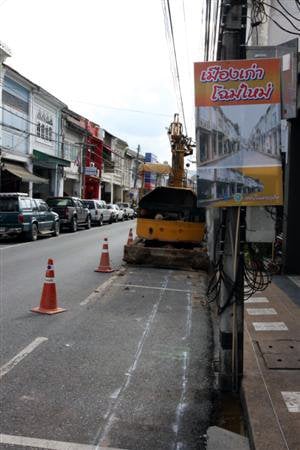 PHUKET: Phuket City Municipality has received an award in the category of ‘Promoting Economic Development’. The accolade has been granted in recognition of the municipality’s ‘Old Town’ project.

Phuket City Mayor Somjai Suwanasupana said the municipality was also cited as one of 16 “exemplars of good government” by a group of institutions.

The group includes the Thai Environmental Institute; Germany’s Konrad Adenauer Foundation; United Cities and Local Governments Asia-Pacific (UCLG ASPAC), the regional section of which is based in Jakarta, Indonesia; and the Local Government Development Foundation (Logodef), based in Manila.

The report was published on the Thai-language Daily News website on Thursday.

The selection was made under the auspices of the European Commission (EC) as part of a project called ‘Partnership for Democratic Local Governance in Southeast Asia’.

Five nations are targeted by the project: The Philippines, Vietnam, Cambodia, Indonesia and Thailand.

“The project goal is to create a network of local governments in the five nations to promote consultation and exchange of ideas,” said Mayor Somjai, who has occupied the mayor’s seat in Phuket Town for most of the last decade.

“The institutes selected six local governments notable not only for achievements, but for winning acceptance from local people for their initiatives in six cases,” she said.

“Our Old Town commercial zone development project was cited as a case in point, as were investments aimed at economic revival in the city and its communities. They saw that we were promoting not only growth but local pride in our traditions.

“We also offered the chance of participation in planning and operations to local associations and individuals,” said Mayor Somjai.

Phuket Town was chosen one of just 16 exemplars from the five nations by “a committee of experts on good government” meeting in Phnom Penh, Cambodia.

“Information about Phuket Town will be broadcast throughout Southeast Asia. Personnel will be exchanged and study trips undertaken between the various city governments. People participating in the project when they return home will become trainers, showing others how to improve performance,” Mayor Somjai said.

“Winning recognition on an international scale for good governance makes city workers and members of the city government proud, too,” Mayor Somjai said.

The project, begun in March 2010, is funded by the EC and the Germany’s Ministry for Development Cooperation.

During its 30-month lifetime, the project will establish a network of local government associations and concentrate activities on: grassroots participation in planning and decision making; institutional governance; urban environment; fiscal management and investment promotion strategies.

The 16 best practice cases, having been identified, will be transferred to selected local governments.

The overall project aims at improving living conditions of poor and disadvantaged people through increased participation in local planning and decision making.

Other activities include: creating a website and study materials; training selected personnel and developing an exchange program for participants.

Two cornerstones of the Old Town development plan are the on-going project to bury underground cables in the old quarter and the construction of a new wet market on Ranong Road.

The cable project, now in its second phase, is widely hailed as a success.

The Ranong Road Market has proven more problematic. Completed over a year ago, vendors with the right to occupy stalls there are balking at the chance to do so, citing high fees.