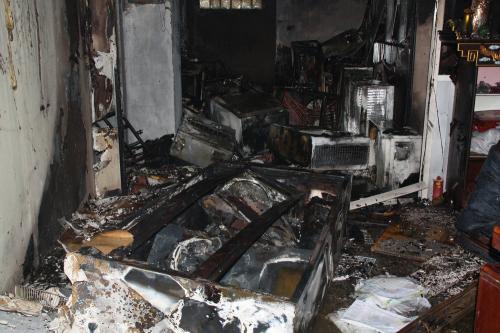 PHUKET: Police believe a short-circuit started a fire that caused a million baht in damage at an air-conditioning store in northern Phuket this morning.

The fire was reported at 8:30am by 25-year-old shop owner Panida Mekthavornsawat, who arrived to open her New Kee Equipment store only to find smoke billowing out from the roof.

The store, located about 500 meters north of the Heroines Monument (map here), also specializes in air-conditioning parts and maintenance.

“The firefighters separated into two teams. One team entered the building to fight the fire inside, while the other team doused water onto the back of the shop.

“Local residents and the rescue workers carried whatever products they could out of the building to safety while the firefighters battled the blaze. It took about an hour to extinguish,” he said.

Ms Panida told the Phuket Gazette that she did not suspect arson.

“I don’t have any conflicts with anyone. The fire might have started from a short-circuit,” she said.

“At this stage, we believe a short circuit started the fire, but the Phuket Forensic Office needs to investigate before we can confirm that,” he said.