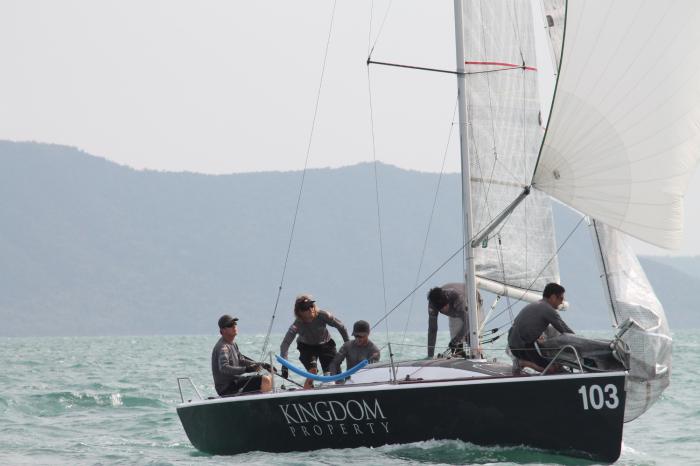 Leading Phuket yachtsmen Scott Duncanson and Alfie Rowson are travelling to Pattaya this week to compete in the 2014 running of the prestigious Coronation Cup. The royally affiliated regatta is held annually at Ocean Marina, Jomtien, in celebration of His Majesty the King’s accession to the throne.

Now in its 19th year, the event is unique in that competitors race one-design, or near identical boats, known as the Platu 25 class. The 7.5 metre long, inshore racing yacht was specifically designed for Thailand, by world renown yacht designer Bruce Farr in the mid 1990s. The name Pla-Tu is in fact the Thai name for a small, tasty fish often eaten with Nam Prik, a very spicy chilli paste and is very popular within the Thai community.

Since then the class has grown, reaching international One Design status and is now raced throughout Europe and Asia-Pacific with over four hundred boats built to date. The Coronation Cup is one of four regattas that make up the annual Platu One Design Championship.

Scott explained, “As the boats are near identical, boat preparation is key to ensure that the sails and their control systems work perfectly.

“Then it’s up to a talented and experienced crew of five to start and sail the boat around the course as efficiently as possible.

“Combine this well-proven formula with some help from the wind-gods and hopefully we’ll be challenging for a podium position.”

Held in conjunction with the Top of the Gulf Regatta, the 2014 event is shaping up to be one of the most competitive ever, with 18 entries, and some professional crews challenging from Australia, Hong Kong, Japan, Malaysia, Cambodia, Singapore and, of course, Thailand. The ten race regatta commences on the 1st of May and concludes on the 5th.