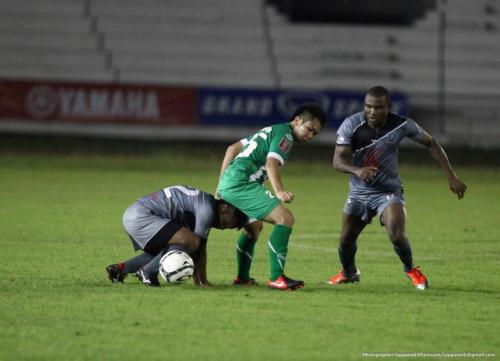 The match was played at Thupatemee Stadium, on the northern side of Bangkok, where the islanders are set to play the Air Force “Blue Eagles” again, tomorrow, April 27, in a YL1 week 8 fixture.

That rematch will kick off at 6pm.

With Phuket FC firmly committed this season to promotion up to the Thai Premier League (TPL), the stakes for Saturday’s match will be high.

All three are expected to be fielded in the league match tomorrow, however.

Air Force United had the first real chance of the game in the second half, striking the ball just over the bar from 20 yards out.

Phuket sealed the victory in the 83rd minute when Brazilian midfielder Junior “Juninho” Guimaro beat Air Force’s keeper at the near post from a free kick just outside the area.

For video highlights of the match, including the goal, click here.

The Islanders’ FA Cup round 3 match date and opponents have yet to be announced.

The round of 32 will include 18 teams from the TPL and the 14 teams that advanced from round 2, including Phuket.

Other Round 2 FA Cup results are as follows:

Singh Tha Reua, also known as the Port Lions (formerly Thai Port FC), were one of the three teams relegated from the TPL last season, along with BBCU and TTM.

Also with 15 points after the first seven fixtures of the season, the Port Lions are joint top with Phuket, BBCU and PTT Rayong.