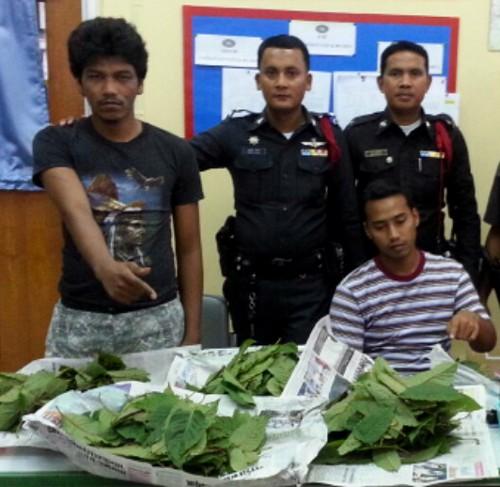 PHUKET: A nervous drug suspect brought police back to his kratom dealer’s house after being busted at a Phuket checkpoint.

The 19-year-old appeared suspicious to police as he arrived at a checkpoint established at Muang Mai – Pa Khlok Road yesterday.

“We had the checkpoint set up to search for drugs and weapons in the crime prone area,” Thalang Police Deputy Superintendent Amnuay Kraiwutthianun said.

After searching the teenager, police found about 20 kratom leaves tucked into his underwear.

Despite kratom trees being indigenous to Southeast Asia, their leaves have been a controlled substance, in the same category as cannabis, since promulgation of the Kratom Act in 1943. The law made planting the tree illegal and ordered all existing tress cut down (story here).

“The teenager confessed that the leaves belonged to him and that he had bought them from Chalerm Bairaman, 23,” Lt Col Amnuay said.

“He then took us to Mr Chalerm’s house in Thalang. Mr Chalerm was home.

“Inside the house we found 2.1 kilograms of kratom leaves, which Mr Chalerm confessed he was selling,” Lt Col Amnuay said.