In an apparent suicide, the body of a South Korean man was found in a pickup truck in the city district of the southern resort province of Phuket yesterday, his head covered in a plastic bag. Police found the white pickup, with Phuket licence plates, in the car park of the Golden Triangle Been Co. in tambon Vichit after being alerted at around 11:40am.

The body of the 40 year old man, whose name is being withheld pending notification of relatives and the South Korean embassy, was found in the driver’s seat. He was wearing a black T-shirt and jeans and his head was covered with a plastic bag held in place with adhesive tape around his neck. Police say a tube, connected to a nitrogen gas tank in the back of the pickup, was inserted into the vehicle with the end attached to the plastic bag. A letter in Korean was found in the vehicle.

An official at the Phuket’s South Korean consular office translated the letter, which was an apology to his family and girlfriend, saying he had tried his best but had not succeeded and that he wanted “to take a rest now”.

Security camera video showed the man drove from his house in Vichit to the company, where he worked as an international marketing manager, at around 7:35am. After parking the truck, he got out to smoke a cigarette. He later got back in and busied himself in the truck for about 17 minutes.

Police say the man might have been suffering from stress due to personal affairs or work. His body was sent to Vachira Hospital for a post-mortem examination. 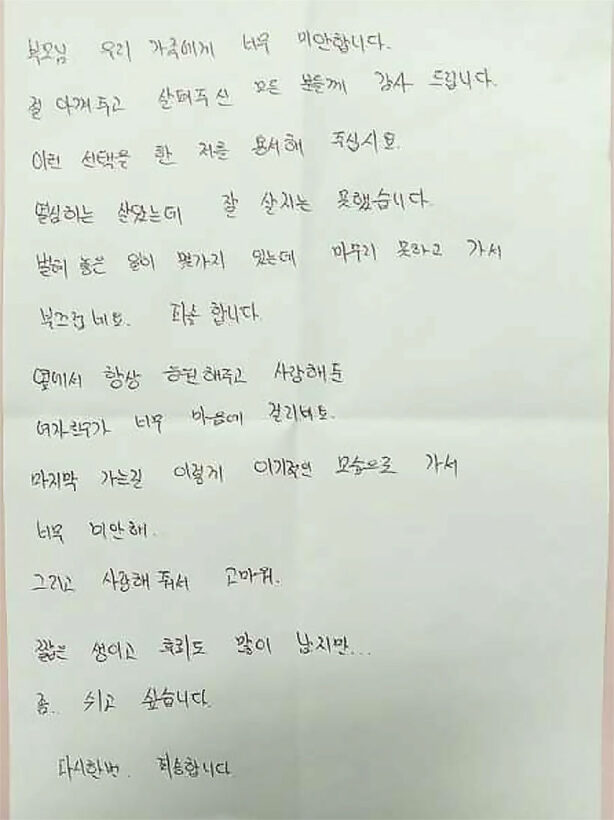