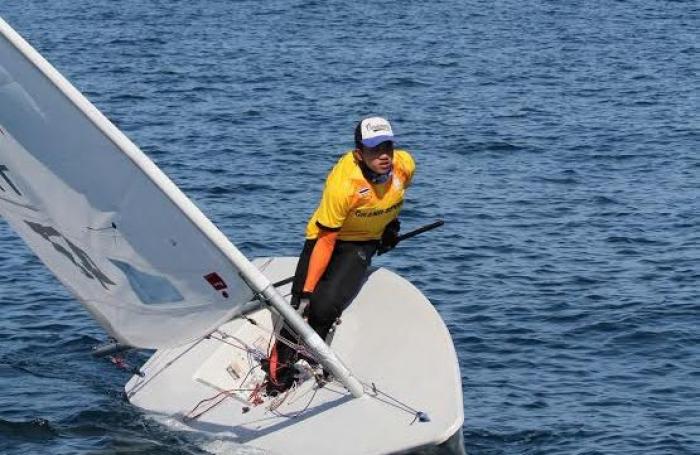 PHUKET: The International Dinghy Classes Race 2015, a part of the 29th annual Phuket King’s Cup Regatta, wrapped up after four days of racing on Thursday, a lay-day for keelboats and multihulls, as young sailors tried to seal Regatta victory in honor of HM King Bhumibol Adulyadej. The growing number of fleet entries from 45 last year to 78 dinghies this year shows the rising enthusiasm for sailing among youth in Thailand.

Optimist sailors and Laser sailors were in competition in decent winds and beautiful sunshine. They were led by Optimist Girl sailor Chanokchon Wangsuk, who claimed overall victory in the Optimists – a brilliant performance out of 56 Optimist sailors and a testament to the rising quality of junior sailing among Thais.

“On behalf of the committee, I would like to express my thanks to PTT for sponsoring our Dinghy program as part of the 2015 Phuket King’s Cup Regatta. It’s great to see growing Optimist and Laser fleets every year, with the improvement in skills being exponential and rapid,” said Kevin Whitcraft, president of the Phuket King’s Cup Regatta Organizing Committee.

“Thailand certainly has a great competitive sailing future if the performance of the kids is anything to go by, and of course, we are all inspired by HM The King, a superb inspiration to our very professional young dinghy sailors this year.”

The International Dinghy Class was introduced as part of the Phuket King’s Cup Regatta, creating a network between sailing clubs to inspire more youths in Thailand to take up the sport, especially the Optimist challenge for youth under 15 years old. The establishment of the International Dinghy Series has helped bring to the forefront many young Thai sailing talents, with more sailors joining every year.

The program serves as an accessible means of competition for young sailors from many sailing clubs in Thailand, including Phuket, Pattaya, Phang Nga and Songkhla, in order to prepare them for the international competition and for the Phuket King’s Cup Regatta. PTT notes that the program is also in line with the company’s mission to continually strive toward clean energy and zero emissions for a sustainable energy future.

The Phuket King’s Cup regatta is proudly sponsored by the Phuket Gazette and the ‘Phuket Today’ show, the island’s only nationally broadcast television program – aired daily on True Visions and all leading provincial cable networks.