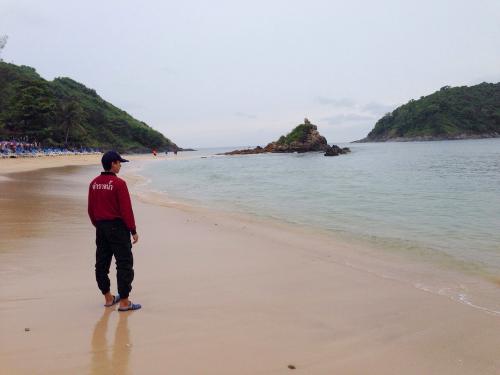 “Rawai Municipality officers have joined the mission. They provided one speedboat and one small boat to help conduct the search,” he added.

“We have divided into teams to search on sea and along the coast,” Lt Col Sakchai told the Phuket Gazette.

“I received a report from our search teams that the waves are getting bigger. However, we will continue our search for as long as we can,” Col Sakchai said.

Mr Gao and his friend Liu Shu Jian arrived in Phuket holiday as part of a group of four friends, all Chinese nationals who are studying in Singapore.

The two men were posing for a photo at Phuket’s iconic Promthep Cape when they slipped from the rocks.

Mr Liu managed to recover and to be pulled to safety by friends and other people standing nearby. Mr Gao, however, disappeared into the sea (story here).

Staff at Phuket’s Provincial Hospital confirmed this morning that Mr Liu has been discharged from the hospital’s care.

The staffer made no comment on the condition of Mr Liu’s mental well-being after surviving such a traumatic experience.