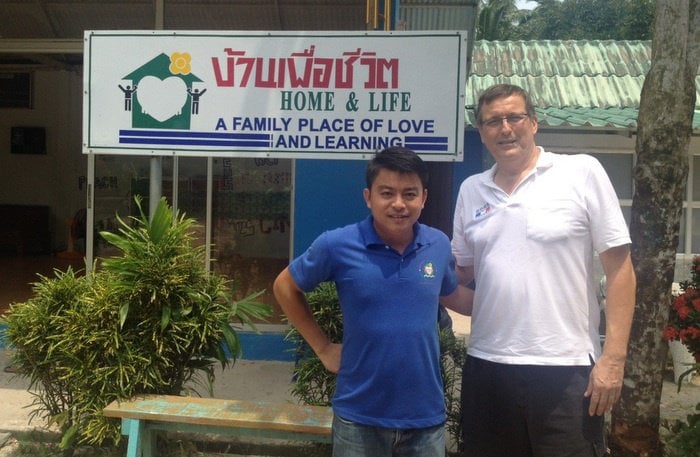 PHUKET: The Home and Life Foundation * is seeing the fruits of last November’s ‘fun-raising’ event ripen.

The full 900,000 baht raised at Centara Grande Karon, who hosted the event, has been spent on improving the Phang Nga Home and Life Foundation, which was established in 2006 to care for children who had lost their parents in the tsunami.

“We spent the money in four parts,” said Larry Amsden when he and fellow supporter of the Home & Life orphanage Brad Kenny paid a visit to the foundation’s revenue-generating coffee shop in Phang Nga earlier this month to oversee some of the projects that are nearly finished.

“We first built a wall to prevent landslides alongside the coffee shop. Then we built the aquaponic garden and a bakery kitchen.”

The final step in the project will be to improve the landscape surrounding the site.

The wall and aquaponic garden have already been completed, while the bakery is expected to be finished by the end of the month when landscaping will begin.

“Using 200,000 baht from the fundraiser, we started to build the 40 meter rock wall to prevent landslides,” Bhudit Maneejak, founder and foundation manager, told the Phuket Gazette. “We started in February and it was completed in March.

The next project that came to fruition was the aquaponic garden, which cost 60,000 baht and was completed in May.

“The bakery kitchen is expected to be finished in October and cost 350,000 baht,” Mr Bhudit said.
The remainder of the funds raised have been allocated to improving the landscape surrounding the shop.

“In November, one year after the [fundraising] event, we will see big changes,” said Mr Kenny. “The reason that we built the bakery kitchen and vegetable garden was to help the orphans to make money to support their own lives, rather than waiting for donations.”

Children who stay at the foundation are able to sell baked goods in their shop, as well as to eat and sell the vegetables that are grown on the property.

“I think it is a good use of money and a good start,” Mr Kenny added.

Children who are now 18 years old or more are still welcome to stay at the foundation under the condition that they pay a small accommodation fee that goes toward helping the younger orphans.