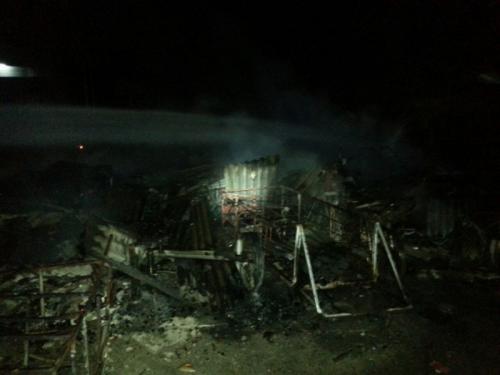 With the aid of windy conditions, it took just 30 minutes for the fire to destroy three wooden homes in Soi Palai (map here).

Sombat Suwit told the Phuket Gazette he had no time to lose in escaping the blaze.

“It was too fast. I didn’t have any time to grab anything from my house. Now I have nothing left,” he said.

“They took off on a motorcycle, but I cannot remember the license plate number,” he told police.

“I believe the fire was started over a land dispute. An investor claims to own the land we live on, but we have been living here for a long, long time,” Mr Sombat said.

Phuket Governor Maitree Inthusut, at the scene coincidentally overseeing a police night patrol, gave 2,000 baht out of his pocket to each of the three home owners to help them with immediate needs.

“I have ordered Chalong Police to investigate this case thoroughly as there are many problems between investors and villagers about land ownership in Phuket and I want to see justice served in this case.” Gov Maitri said.