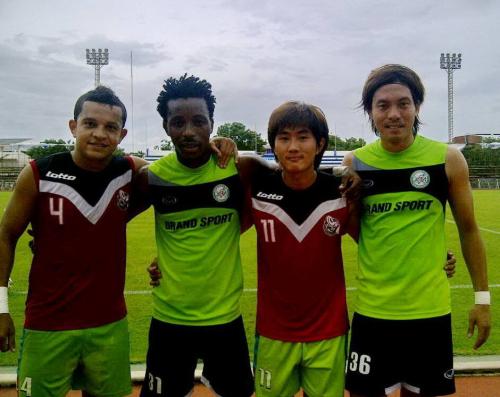 PHUKET: It was an exciting weekend for the Thai Sports world, especially for Thailand’s professional and semi-professional football leagues.

Phuket FC seized back their 5th place ranking in the 18-team Yamaha League One (division 1) with a much needed 0-1 win on the road to Rayong United on Saturday evening.

The match’s only allowed goal was scored by Georgian import Giorgi Tsimakuridze who headed in a cross in the 22nd minute to score his fourth of the season.

The Islanders now return home to host Thai Premiere League side Ratchaburi Mitrphol in a do or die Thailand FA Cup third round match.

To be played at Phuket’s Surakul Stadium, kickoff will be 6pm this Wednesday June26 (click here for map).

Win or lose, the 5th placed Islanders need to conserve their energy for their next league match on Saturday, June 29 against 6th placed Nakhon Ratchasima FC – the Swat Cats. Kickoff is at 6.30pm.

Phuket’s best scorer is Dudu, joint fifth in the league with 6 goals, followed by Giorgi (4), and Doumeng with 3 goals; Nenebi and Chana each have scored two goals.

Also on the Isthmus of Kra, Wester Region D2