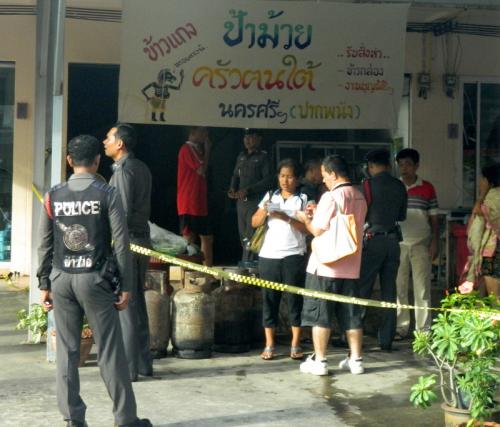 PHUKET: A family fled the kitchen of their Southern-Thai style restaurant early yesterday morning after a leaky gas tank burst into flames.

The two-storey building housing PahMuay restaurant on Soi Patchanee, in the housing estate opposite Super Cheap in Rassada, was consumed in flames by the time firefighters and Phuket City Police officers arrived at the scene around 6:45am.

“The firefighters took about 30 minutes to squelch the flames. The kitchen and restaurant were seriously damaged and a nearby house had minor damage done to it,” said Phuket City Police Deputy Superintendent Chao Pormna.

Kimmuay Petchnin, the 56-year-old owner of PahMuay, said that she, her husband and daughter were cooking. Suddenly, they heard gas leaking from one of four cylinders and a fire started.

“My daughter and I started running. My husband was already outside and moved the car before the flames got too big,” Ms Kimmuay said.

“At this stage, we believe the fire started due to the gas leak. However, the exact cause of the fire will be determined by the Phuket Forensic Office,” Lt Col Chao said.