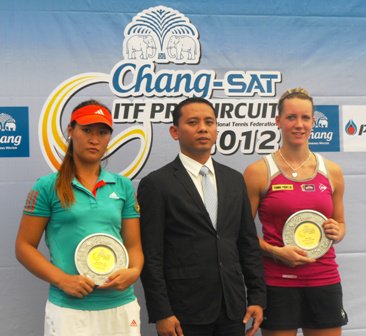 With local support weighing on the side of her opponent and number six seed from Thailand, the 20-year-old German showed early signs of nerves, losing the first game through four unforced errors.

But from there on it was all Pfizenmaier, breaking Noppowan’s serve three times to take an unassailable 5-1 lead. Noppowan did hold her serve one last time before Pfizenmaier closed out the set at 6-2.

Thailand’s number two had dropped games in her previous two matches and after losing the first service game of the second set, Noppowan fought her way back to level the scores at two games each.

An attacking fifth game from the 20-year-old Chiang Mai star offered a glimpse of her abilities as she moved the German around the court. A superb drop shot winner at 15-15 had the crowd on their feet before she confidently served out the game for a 3-2 lead.

Pfizenmaier held her serve in the sixth game to draw level, but a number of poor line calls in the seventh game clearly frustrated Noppowan and the advantage was back with the German at 4-3, who then consolidated her position by holding serve for a 5-3 lead.

While Noppowan won the next game, the impetus to rally a recovery had clearly evaporated.

The German player closed in for the kill and lost only one point as Noppowan sprayed her returns high, wide and into the net.

Speaking to the Gazette after her victory, Pfizenmaier explained that she knew what to expect from Noppowan.

“I saw [Noppowan] play yesterday and learned she can fight a lot. Even after the first set I knew she wouldn’t give up, so I continued to play the same way and give my best. She did well, but I was the better player on the day,” she said.

Noppowan was disappointed, but the ‘fight’ that her opponent had earlier recognized was also evident.

“You don’t find many players in Asia who play like her so it was quite difficult out there today. Next time we play each other, it will be different,” she said.

The US$25,000 tournament begins its second round on Monday. The standard is exceptional, and for anyone interested in high caliber sports competitions, the ITF tournament at TSLC is a ‘must attend’ event.

Poll: Which Cabinet-approved project will most help Phuket?