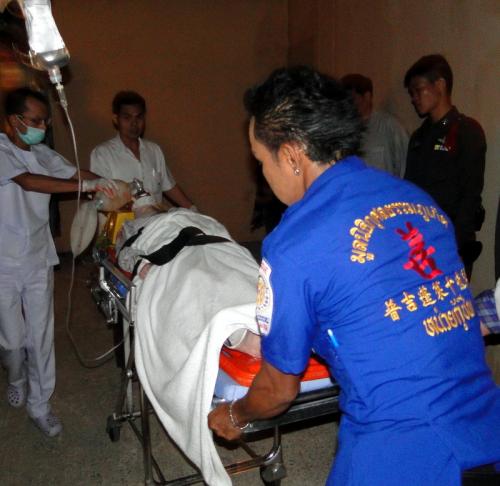 PHUKET: A German tourist tumbled from a balcony in Patong early this morning and is on life support at Vachira Phuket Hospital.

Patong Police received a report at 2:45am that the 35-year-old German had fallen from the 3rd floor balcony of his room at the Kalim Resort.

“At the scene we found the man, dressed in a striped shirt and white underpants, lying unconscious on the cement floor at the side of the resort,” said Patong Police Duty Officer Thawatchai Srimai.

“His arms and back were broken and blood was flowing from a head wound,” said Lt Thawatchai.

The German was taken to Patong Hospital and later transferred to the better equipped Vachira Phuket Hospital.

Staff at Vachira Hospital confirmed to the Phuket Gazette late this morning that the German has a blood clot in his brain and is in the intensive care unit (ICU), on life support with a feeding tube.

Inside the man’s room, Police found an unaddressed letter which said, “I am dead; come with me to paradise. I love you with all my heart. Kiss…”

The Gazette is withholding the name of the man until relatives or next of kin have been informed.