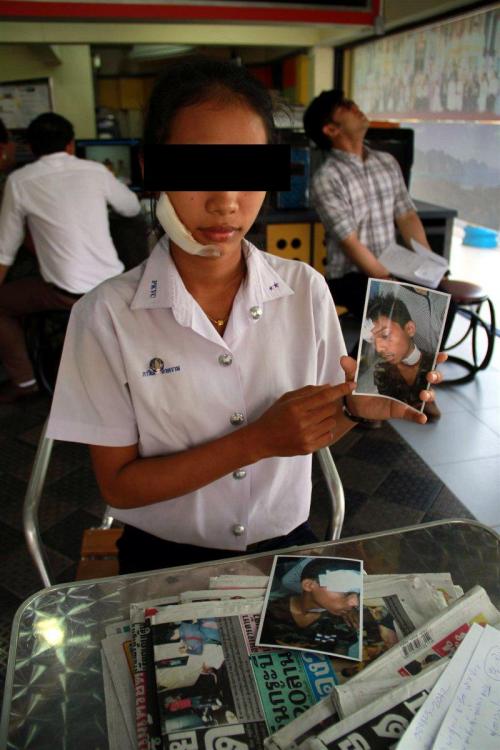 The 17-year-old teenager, given the pseudonym “Koy” because of her age, said that she and her boyfriend Benz Densiri, 18, were leaving the garage owned by Benz’s father when two boys rode by on a motorbike and “looked at them in an unfriendly way”.

“Suddenly, the two teenagers, sons of a Thalang policeman, turned the bike around and came back to us. They hit me and Benz with a metal rod about a meter long for no reason,” Ms Koy said. “Benz was hit on the head and chest.”

“We ran to the garage for help. They came after us, but when they saw all the people in the garage, they drove off,” she explained.

Half an hour later, the couple went to the restaurant owned by the boys’ mother to ask why the boys had attacked them, Ms Koy said.

“We live in the same village and we’ve never had any arguments,” Ms Koy said.

“Instead of talking it out at the restaurant, the mother asked us all to go outside to settle the problem,” said Ms Koy. “But the fight got worse.”

“The boys’ father, Thalang Police Sen Sgt Maj Wichit Dada, was there,” she continued. “He should have helped us stop the fight.”

“One of the boys walked directly to me and my boyfriend. He punched Benz and they started fighting. Benz was cut,” she said.

An officer at Thalang Police station explained to the Phuket Gazette today that Sgt Wichit said that Mr Benz’s wounds were caused by jewelry his son was wearing. Sgt Wichit also told fellow officers that his son was wounded in the fight and was taken to hospital. Additionally, the officer told the Gazette that the four teenagers were close friends and “did everything together”.

Despite this “close friendship”, Ms Koy alleges that Sgt Wichit restrained Mr Benz while one of the boys threatened him with his father’s gun.

Nonetheless, Ms Koy says she was finally able to defuse the situation to the point that she and Mr Benz could leave and be treated at Thalang Hospital.

Ms Koy needed 10 stitches in her face and Mr Benz required eight for a neck wound and nine for the wound on his head.

After receiving treatment at the hospital, the two went to the Thalang Police station to file a complaint.

“I could tell that the police did not really want to accept our complaint,” Ms Koy said.

The police told the teenagers to come back to the station at 8:30am on Sunday to settle the matter.

Ms Koy said the couple feared for their safety and fled to Krabi for the night. On the following day, February 15, Benz’s father brought them back to Phuket.

The couple turned to members of the Phuket Press Club for help.

“They pointed a gun at Benz’s head,” Ms Koy alleged. “They should be charged with attempted murder.”

No shortage of water in Phuket this dry season, officials say